I’m a mormon. Some of you know this about me. If you don’t, I wasn’t hiding it. It is in my about me page, after all.

In my life, frequently I’ve been accused of being a “cool” mormon. Or, not being “like the other mormons.” I have a lot of non-mormon friends that are very diverse themselves. I’m a people person, so I can never imagine myself being confined to having only mormon friends. Plus, I grew up in Texas. Not a whole lot of mormons down there. I don’t offend easily, and my Mom is a convert, so LOTS of non-mormons in my family.

But, just to be abundantly clear to anyone wondering, yes, I’m a fully active, participating mormon. Meaning, I don’t smoke, drink, and try not to swear. I hold a temple recommend (meaning I have interviewed with church leaders and been found “worthy” to enter the temple…different from the church buildings we meet in every Sunday). I dress insanely modestly, and try to be a decent human being. Honesty is important, and yes, I believe Jesus Christ is my Savior. And, I believe in and read the bible too. But, sometimes, I worry when people tell me, “You aren’t like the other mormons I know” that I need to repent, because maybe I’m not being a good example? But, I like to think that it’s just because I’m maybe a little more easy going than some. I’m not sure. I just try to be myself. 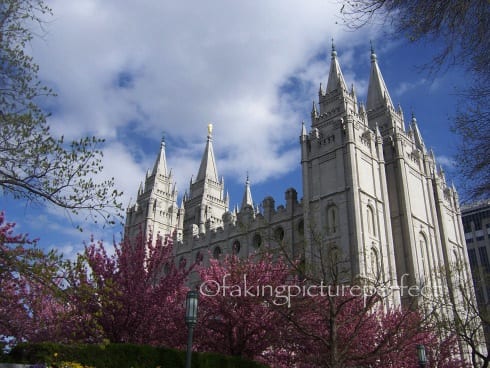 In fact, mormons are pretty weird. Like, really weird. And, that’s OK. I’m used to it. Part of our weirdness stems from the language we use that is unique to the mormon culture. We speak in weird terms using words like wards (simply put our Sunday congregation) and Stakes (not the kind you put in the ground, but a group of wards), and we frequently abbreviate, well, everything. CTR, YW, RS, BofM, EQ, D&C, MoTab. Those all mean something to a Mormon.

Converts have complained about this so much that in 2006, the church put out an issue of the church magazine that was devoted entirely to new members of the church. In it was an article titled, “Helpful words to know“. It’s a whole new language when you become a mormon. Believe me.

But, to me, I was raised in the mormon church, so it is second nature. But, I still frequently have conversations explaining myself to a friend.

Me: I got a new responsibility at church.

Friend: Oh yeah? You guys sure do have a lot to do.

Me: Yeah, it can be overwhelming. And, we don’t get paid either. No one does.

Friend: What!!?? They don’t get paid? But, how do they support their families?

Me: They have full-time jobs in addition. We thing of the responsibilities more like  “callings”. Because we see them as coming from God.

Friend: But, who gives you the “calling”?

Me: The Bishop. (Think pastor in any other Christian religion).

Friend: It doesn’t seem like much of a “calling” if it’s coming from him.

I get their point. We’re weird. That’s OK, I’m used to it. And, one of our biggest unknowns to the common non-mormon person, is that Mormon is actually not the name of our church. Our church has a name so long that they have created a song about it to teach the kids the name of the church. The name is The Church of Jesus Christ of Latter-Day Saints. No mormon anywhere in that title. Mormon itself has become a nickname for us because we believe in the Book of Mormon. We’re OK with that, but we prefer being called LDS (yet another abbreviation for Latter-Day Saints).

Is your head spinning yet?

I’m used to questions, and having to defend my religion to others. It’s not easy being a mormon. But, we are actually a pretty diverse group. Not all of us believe the same about politics and social issues. Not all of us are Americans. Not all of us are a cookie cutter version of what you might think when you hear the word “mormon”.

We can be cool. Sort of. If you think people who pray a lot, call themselves a child of God on a regular basis, don’t take the Lord’s name in vain, and use common phrases like, “I’d like to bear my testimony” and “with every fiber of my being” are cool. Yeah, probably not so much, huh?

The truth is, even I find large groups of mormons annoying after living in UT. But, we are good people. We believe in God, and that Jesus Christ is the One we need to follow, and we are Christians.

While being a mormon may not ever make me “cool” per se, at least I can speak a language that you can’t. Not sure if that makes me “cool” or weird. That’s OK, I’ll take either.

*this post was written for the weekly writing challenge: Manner of Speaking.

« My Children Are Saving Me Thousands in Therapy.
Real. Not Perfect. »