Sometimes I fear I wasn’t meant to be a mother.

Just typing those words leaves me feeling empty and scared. I know I will be judged for them by the childless, the sanctimommies, and the empty nesters that say with a hand over their heart, “But it goes so fast!”

As I sit on my couch trying to think my own thoughts, three tired children who went to bed way too late last night creep next to me to peer over my shoulder at whatever it is I’m trying to work on, and muster the tiresome words I’m sick of hearing, “I’m bored.”

I groan inside feeling guilt that I should be the one entertaining them while simultaneously feeling resentment that I can’t even focus without interruption long enough to write a sentence. I don’t want to play with the four-year-old who begs me to play with him relentlessly, and I wonder if my personality was really meant for motherhood.

But, as I feel suffocated by the push and pull of motherhood, I wonder if I was meant to do this. If maybe motherhood isn’t in my DNA because I don’t love playing Candyland with my four year old, and my ten-year-old doesn’t talk to me when I want her to, and the weight of my seven-year-old’s anxiety issues is always in the back of my mind.

I went on a trip for the first time in 8 years with my husband without our kids. It was dreamy. A trip to NYC, a hotel with fancy white robes, and an ease of travel that doesn’t come with three kids in tow. We ate good food, and slept in as late as we wanted, and meandered down the streets of the upper west side carrying fresh flowers and walking hand in hand. I felt more easy going and relaxed. More like myself. 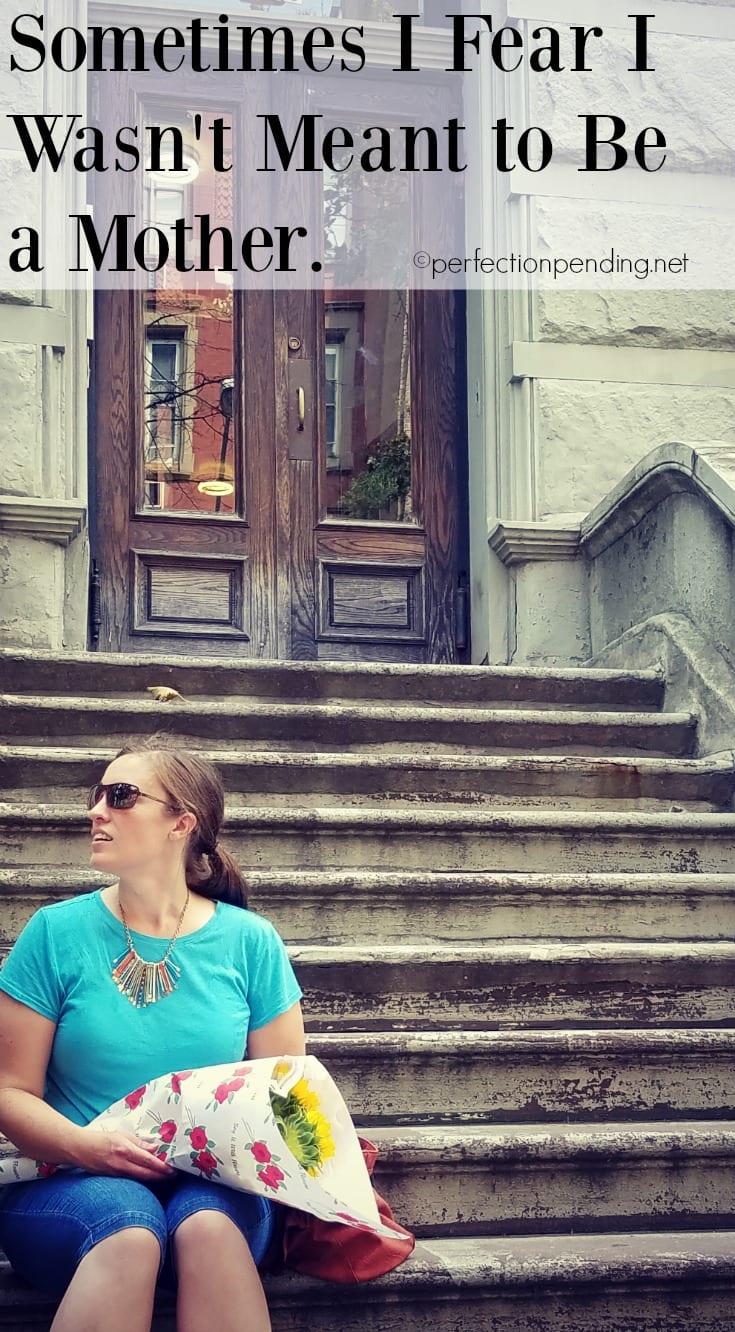 And, days after we were home, as I felt the tension in my neck start to build and a relentless dull headache that I can’t seem to shake day after day, I fear again that maybe I wasn’t meant to be a mother. After all, I was so much better on that trip with my husband when I wasn’t mothering.

I started to look back at that trip like a dream, unable to recognize the woman that let her husband call the shots, and didn’t stress about hiccups in the trip because she knew she was being taken care of, and wasn’t in charge of anything, or anyone. It didn’t seem real how I sat on a park bench in the sun, with my headphones in and my husband snapped a photo of me because I “looked like a New Yorker” in that moment; happy and at ease in a giant city of chaos.

I feel sad when I reject my children’s advances for attention when I have something I’d rather be doing and tell myself that other mothers probably want to play with their kids, so why don’t I? Obviously it’s because I wasn’t meant to be a mother.

The weight of my responsibility is weighing me down making me question if I was ever in fact, meant to do this at all. Someone else would definitely do it better, and someone else that loves to play candy land would be a better mother to my kids.

After all, I felt more like myself when I wasn’t mothering. So, what else could that mean, except that maybe I wasn’t meant to be a mother to these three fantastic human beings?

Except, I don’t believe I am supposed to be the person I was before becoming a mother. That’s the thing. I think mothering my three fantastic small humans is supposed to transform me into something better. And transformations aren’t supposed to be easy.

The guilt I feel is self-imposed and unnecessary. One of the countless lessons I’ve learned from motherhood is that I need to try to give myself the gift of true, beautiful acceptance of who I am.

Mothering is hard for me. I struggle. I make mistakes. I don’t love playing make-believe with my kids. But, I also do a lot of things right. And, accepting that this mother. Me. My broken, imperfect, high anxiety self is meant to mother the three beautiful souls I’ve been given, is part of the reason why I’m meant for motherhood.

Why were these precious children given to imperfect, broken me? Who the hell knows.

But, I guarantee that I’m learning as much raising them as they are learning being raised by a woman in a constant transformative state of being. In fact, I know I am.

If I were to make a list of the lessons I’ve learned, and the ways I’ve changed, it would be long. And, breathtaking I’m sure. But, I’m too tired to make lists, and I’m too overwhelmed to remember how far I’ve come, so I’ll keep fighting those feelings of inadequacy day by day, hour by hour as they rush in during a moment when I feel selfish and don’t want to play a game.

The weight I add to this whole motherhood thing is probably too great if I am being truly honest. Sure, mothers have an important job, but deep down, I realize that much of who they will become has nothing to do with me. And, when I think about it, they will spend many more years away from my care than in it. It’s heartbreaking to think about. In fact, I can’t think about them leaving me without feeling like a piece of me will die when that happens.

Which just proves me wrong yet again.

If I feel that way, then I am meant to be a mother. So I can become who I’m supposed to be. Transformed into a woman far more beautiful than who I was before.