My youngest recently turned three. The night before his third birthday, he was being such a pill. I’ve been in denial about the fact that he should probably give up naps if I don’t want bedtime to be such an ordeal. Because, frankly, I’m pretty sure he is a night owl that likes to sleep in.

So, it was the day before his birthday, and he was jumping up and down in his bed fighting sleep, and I was at the end of my very thin rope. I still had to run an errand at 9pm at night to get balloons for his party the next day, and it had already been a long day, and I just wanted him to go. to. sleep. I was practically begging him, and he was ignoring me.

Out of desperation, I told him to lay down, and I pulled out an old trick out of my hat from the newborn days. He was a super fussy baby due to food allergy issues and a constant upset tummy. But, the ONE thing that always worked for getting him back to sleep, was patting him on his little tush. I hadn’t done that in years. But, like I said, I was desperate. So, after he finally laid down, I started humming, and patting. And, within seconds, he was out. My first thought after he went to sleep was relief that my last “baby” who was turning three within a few hours, still needed me. He was still a baby, but also growing up quickly before my eyes. I started to cry.

I was crying from exhaustion and relief that the little jerk (I totally say that lovingly) was finally asleep, but I was also crying because I knew that his baby-hood was slipping through my fingers. He would move out of his crib soon, give up the pacifier the very next day, and before I knew it, he would be leaving me to go to college. I was crying because I knew that while he was constantly becoming more and more independent, he still needed his mommy to fall asleep. And, that felt good.

I was crying because he was growing up and so was I. 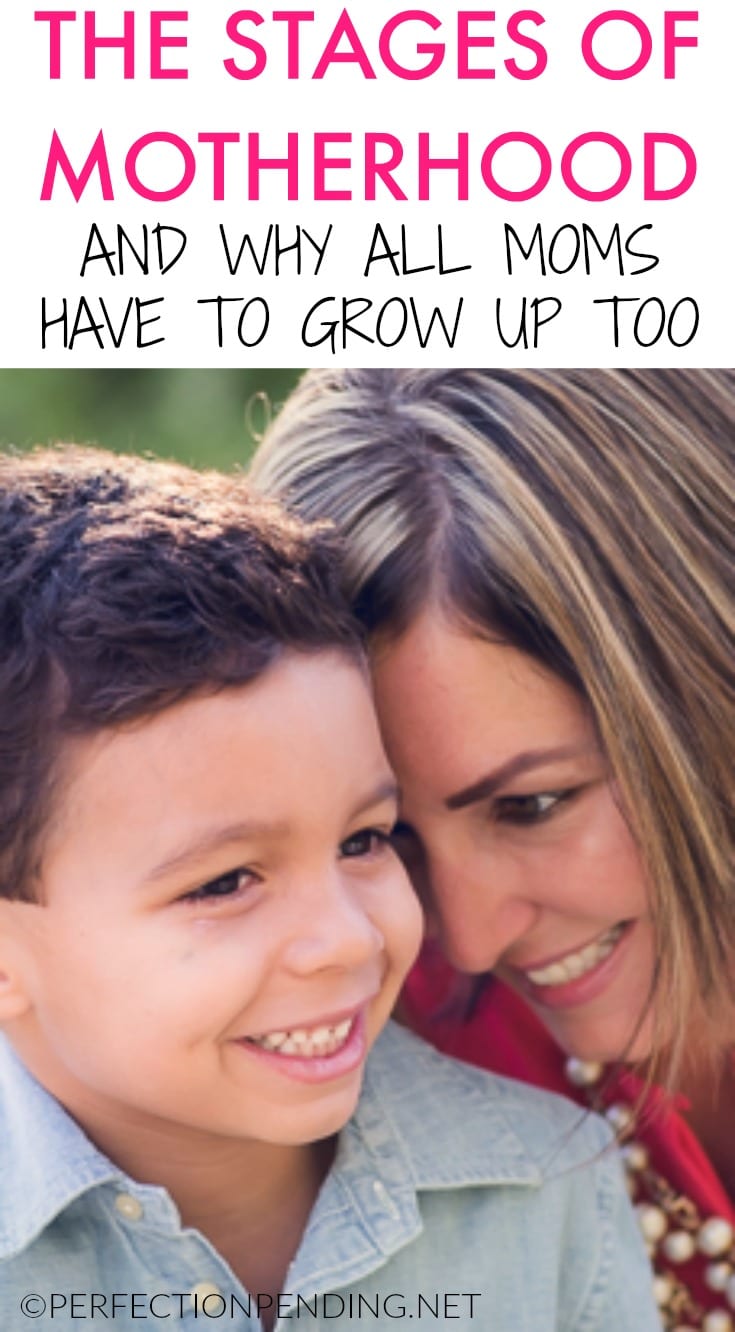 As I sat there in the dark room listening to my boys sleep, I thought about how much I had changed as a mother. When my oldest was that age, I couldn’t wait for each new stage. I was flying through those stages rapidly, and pleading for the next part to come. I was living in the, “I can’t wait until….” phase of life.

I can’t wait until she sleeps through the night.

I can’t wait until she is finally potty trained.

I can’t wait until she starts preschool.

I can’t wait until she can feed herself.

You get the idea. It’s something every parent does. We’re in the survival mode those first few years, and it seems so easy to wish it all away. Little did I know that’s what I was doing during those early years by hoping that it would just. speed. up. I was wishing it all away. There have been lots of beautiful blog posts written about making sure we DON’T wish it all away. I’ve read them, and I’ve felt guilt for doing just that. But, the truth is, I think it’s something MOST parents just have to go through. Those early years of sleep deprivation, and spit up on your shirt, and no personal space are rough. You just want it to be over as quickly as possible.

But, somewhere along the way, I gained perspective. I’m not sure exactly when it was. I don’t think there is some secret to magically understanding that the “in the trenches” years are some of the best. I think we just finally grow up as mothers (and fathers) and realize that we don’t want it to go away. Some parents are born to savor every moment, but I think the majority of us go through The Stages of Motherhood in our own way, and that helps us to “grow up” into the moms we were meant to be.

One moment we’re thrown into motherhood and in our own infancy of sorts. Hovering, worrying constantly, and thinking everyone is judging us. We have bags under our eyes and sighs that come out a little too loudly in public, and we feel a little bitter when someone tells us to soak up every moment. We question our sanity, and are unsure if we’re laughing or crying most of the time just like a hysterical toddler that missed his nap.

Then we reach the teenage stage of motherhood. These years are usually spent popping out more babies with little thought to the consequences. We think we can handle it all, do it all, and be everything. We’re naive just like an actual teenager is. We get too emotional, continue to compare ourselves to others, and throw fits wishing we had our old lives back.

At some point, we ease into the adult stage of motherhood. We have more of a handle on things, and finally let go of the fact that we will never feed our kids all organic even though we know it’s a better choice. We roll our eyes at the other judgy moms, and we do our own thing. We learn that we don’t want to wish it all away, but we want to savor every last drop of cuteness that comes out of our kids’ mouths. We laugh more, play more, and look our kids in the eyes more so they know how we really feel about them. Even though it’s impossible for them to truly understand.

The adult stage of motherhood is far from perfection. For any of you that know my blog even a little, you know that I don’t focus on perfection. But, I’m talking about the kind of mom that is confident in her abilities, that can say I’m sorry, that lets go of the guilt, and that finally learns to savor the good stuff. (I will never savor the moments when a stomach bug is going through our house).

I realized in that dark room, that I think I am finally getting it. I didn’t want any of my kids to grow up anymore. I love each stage they are at, and while birthdays will always be celebrated in my house, each one will still make me a little sad and nostalgic for the year of childhood that is over and gone from their lives forever. Because, one day, all the childhood years will be gone for them, but they will be gone for me too.

To that young mom that is just getting started: I wish I could teach it to you. But, I can’t. It’s something you will have to learn as you go. Don’t feel guilty when you realize that you spent a few years wishing it away. It’s OK because those years are equally hard and beautiful. But, instead, feel proud of who you are once you do realize it. Because you’re growing up just as fast as your little ones are, and that’s a beautiful thing.

« He Is The Gift
Butternut Squash & Pumpkin Soup »