Hey Parents, I feel the need to tell you something I realized fairly recently. You aren’t screwing up. Your kids are.

“It’s Okay to make mistakes.”
“That’s how we learn.”
“Nobody has to be perfect.”

I’m guilty too. Those are all things I’ve repeated to my kids hundreds of times as a parent. It’s my way to give them grace. They are learning after all. And, I do actually believe all of those statements.

But, I was having a particularly challenging day recently. It was the kind of day where I finally just couldn’t hold it in anymore. I went into my bathroom, shut the door and sobbed. My daughter knocked on the door and came in to brush her teeth. She saw me, and asked what was wrong. “Nothing.” I muttered through stifled sobs. She sat down next to me on the edge of the bathtub, and started rubbing my back.

I wanted to spew everything I was feeling. How frustrated I was with her anger, and how she needed to learn to be more respectful. How she was making me feel this way. Awful. Like a failure. Instead, I sat in silence while she rubbed my back. I held back telling her how she was making me feel. Part of me regrets that. Because she was being a jerk. And, it kind of was her fault.

I gave her grace, instead.

Yet, what I realized later, was that I was giving absolutely no grace to myself. None.

I rarely do. In fact, if I think of the countless mistakes I make as a mom, rarely do I give myself a similar pep talk like I give my kids. I never tell myself, “It’s okay, Meredith. She’s your first kid. You’re learning how to do this, too.”

Instead, I turn inward and tell myself all the ways I’m messing up in any given moment.

Hey, parents, where is the grace for ourselves?

The thing is, we often blame ourselves for screwing up raising them, but forget to realize that a big part of this whole raising kids is that they’re probably screwing up way more than we are.

And, get this: it’s actually not always our fault. 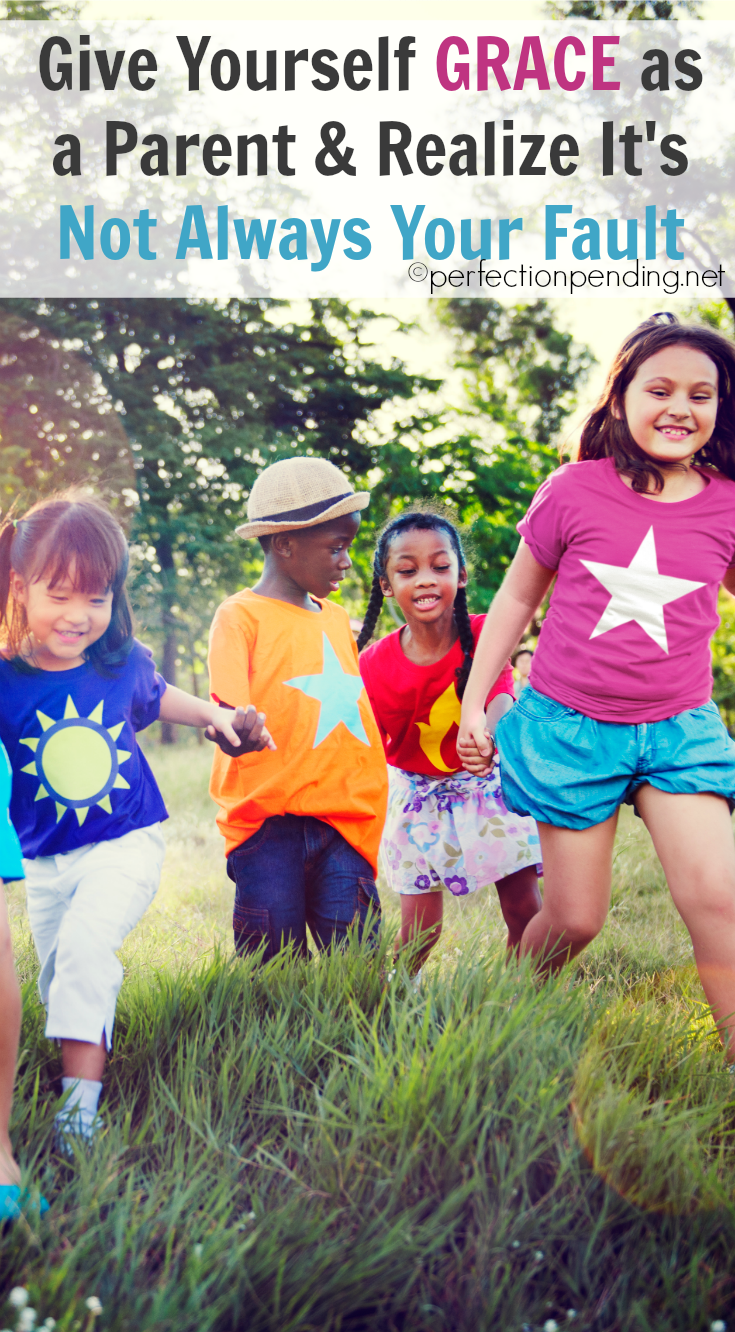 They are trying to learn how to be humans, and sometimes, it’s really really hard to be the teacher to people that have to learn E-V-E-R-Y-T-H-I-N-G.

A lot of the bumps in the road we face as parents have nothing to do with us at all. It really is them. They are making mistakes, and learning, and screwing up, and yet, we blame it all on ourselves. I realized this the other day. And, it only took me ten years to get here. But, maybe I can help someone learn a little quicker than me.

Let’s give ourselves the grace since they’re the ones figuring out how to do all the things. They will continue to mess up royally despite our numerous reminders that the table does not clear itself, or that being kind is actually kind of a big deal. But, that’s on them. Not us.

I could blame her anger on myself, or I could recognize that she is just learning how to control emotions and that means that sometimes, she’ll act downright crazy.

I could blame my four-year-old’s pathetic work ethic on myself, or I could remember that he is learning the basics about being a responsible human being. And, sometimes, he’ll walk from room to room dropping a path of filth behind him like I’m his Cinderella, and responsible for cleaning up his little path of filth.

I could blame every temper tantrum, and fight on not being present enough, or not feeding them enough organic food, or whatever ridiculous shortcoming of my own I can muster up. Or….OR, I could remind myself that one of the basics of life they have to learn is how to interact with other people. And, it really is on them to learn it. Because believe me, we are teaching it until we’re blue in the face. Am I right?

Listen to me, parents: A lot of it is them. Not us. Their failures do not always mean that we failed in doing something. It’s important to remember that we aren’t the cause of all of it. They make choices day in and day out that impact their own lives apart from us. The weight doesn’t solely rest on our shoulders. They are fully capable of being crazy all on their own.

You aren’t screwing up. THEY ARE. And, that’s OKAY. That’s what they’re supposed to do.

They make crazy demands, and keep us from sleeping. They push our buttons. They test boundaries, and break things, and forget to pick up their backpacks even when we remind them over and over and lovingly hang that hook for them so that they have a perfect spot to put them.

They get distracted 2,280 times an hour, and miss the laundry basket daily. They don’t tell us when there is a project due until the night before, and they do not hear us when we’re talking. They expect you to spoon feed them, even though they are fully capable themselves. They resist becoming independent because you’ve always been there for them. THEY make life crazy. It really is on them to learn it all.

It’s a relief, actually, to come to this realization. I hope it’s a relief to you too next time you’re hiding in a closet binge eating something wondering what you’re doing wrong.

We’re good parents that are learning, too. But, more importantly, tell yourself that kids are fully capable of making the crazy all on their own without us having anything to do with it at all. Yes, they’re going to screw up. But that doesn’t necessarily mean that we are.