Hi! I’m Jen Groeber from Mama Art. How great is Meredith for inviting me for a play date? Love her! Life changed with four kids in three years, but the things I think about don’t. How do we get to be who we are? What brought us here? So I spend my blog digging through the metaphorical basements and attics of our identities, sorting through old shoe boxes of photos (actually, that part is literal) and holding these things up to the light. My Mom, my severely retarded brother, and of course, my four awesome kids make pretty regular showings. So come on by. I can’t promise that the mud room will be straightened up, but I guarantee that I’ll pour you a beverage and chat for awhile.

I remember in my 20’s and early 30’s being totally overwhelmed at the possibility of motherhood. My Mom had had a tough row to hoe, to say the least. Watching my mother made you realize that being a stay-at-home-Mom was for the birds. The cuckoo birds, that is. 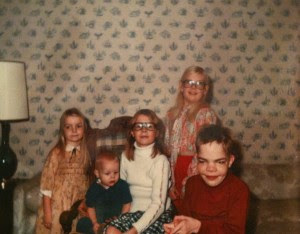 Jennie at the far left. 1976 Even then I had my doubts about a big family.

Plus I’d had this dog when I first moved out of the house and lived on my own.  And that dog made me realize that I was totally incapable of taking care of another living creature. She once ate a dozen chocolate chip muffins, a bag of Hershey kisses, a pound of M&Ms and (wait for it…) a bag of chocolate-covered coffee beans. In one sitting. When my Mom called the veterinarian to see what I should do, they assured her that this wasn’t so bad. They said that the week before a woman had called because she thought her daughter’s dog had eaten razor blades!

“That was me calling for my daughter Jennie,” my mother replied.

If pet ownership was a predictor for nurturing capabilities, I was going to be that kind of Mom.

So I asked my middle school besty who pioneered this marriage-mothering thing for us, “How do you do it? How are you taking care of your kids? How do you keep them alive every day? What did this do to your life?!”

Her answer, “You will never leave the house again.”

No actually, it was more like, “You will never leave the house when you want to, like you want to, ever again.”

Then I got married. And my husband and I tried having kids, like, right away. (I’m older than I look.)

But they didn’t come.

And then they didn’t come.

GUMBALLS! And I mean, more gumballs than you could ever want in three years. My house is now full of four metaphorical gumballs. (All of them were in diapers at one point. You feeling this?) 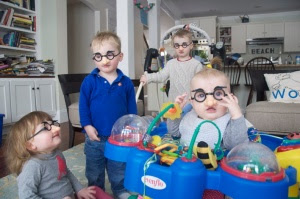 And now, my besty’s prophecy, you will never leave the house again! Or at least, never at your own pace, at your own speed, without cajoling, begging, pleading, maybe some yelling (generally some yelling.) Four coats, four pairs of snow boots, four hats, four pairs of mittens, four school bags, three lunches (don’t even get me started on the lunches.)(Have you seen my mud room?)(Did I mention the car seats?) 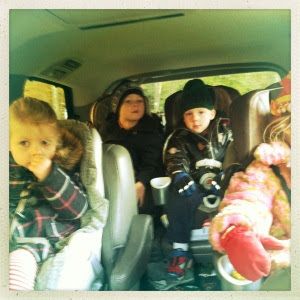 When my husband says he stopped off on the way home from an errand and got himself a sandwich at Panera, invariably I’m flabbergasted. I haven’t done that since I was pregnant with my first child. Do you know how many five-point-harness seat belts that is I’m un-belting and belting? For a sandwich?! I don’t think so.

Sure, I go to Market Basket with all four kids, because who wants to pay a sitter $15/hour for grocery shopping? But when I put them in a jumbo cart and hoof it through the store, we’re a spectacle, an eye-spy-with-my-little-eye, Newman’s Own Fig Newtons bribing spectacle. My biceps are more ripped than when I played college sports- ripped from pushing the cart and lifting the child and carrying the child and oh, did I mention spelunking through the minivan to do the seat belts? 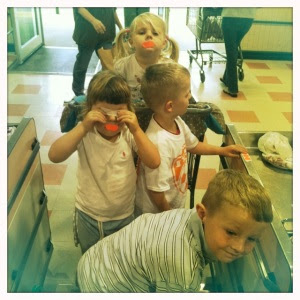 Market Basket in the jumbo cart.
We’d like more of the orange stickers,please.

Because life forever changes when these kids enter your life. And you physically carry them with you wherever you go.

I hear my mother saying to the guy at the train station when I pick her up for her quarterly visit, “And there’s Jennie. I told you about her. She’s the artist and the mother? With the four kids? She had them in three years…” And on and on and on.

And I get it. She carries us with her now, wherever she goes, the five of her children. She still can’t put us down, although we’re spread out across the Eastern seaboard, from Massachusetts to Florida, including a cemetery plot off Rte. 130 in New Jersey. She will never leave the house without all five of us in tow.

Honestly now, my kids are all out of diapers, which was a relief. (Although who knew wiping butts every time they use the toilet would be such a big thing?! Why didn’t my besty tell me about THAT?!) They can put on their own snowpants 50% of the time and two out of four children in my minivan can do their own seat belts on any given day. They are growing more independent each week that passes. I know this specific time in my life of being fully enveloped in physically caring for my children will pass all too fast. 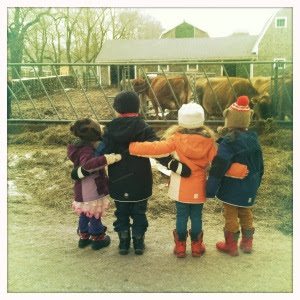 But my besty was right. The biggest way that having children has changed my life? It’s that I will forever pack into my heart and mind, shove into my psychological purse and cram into my metaphorical diaper bag, the essence of my children. Every aspect of who they are and what they do and where they go, I will carry those things with me forever.

Don’t you just love Jen’s perspective?  She was super “brave” to be first in my guest posting series!! I knew I wanted her to post for me as soon as I read her brilliant post, My Mother’s Letters, that literally brought tears to my eyes. She has a great perspective on how motherhood has changed her, and I hope you all loved her post today as much as I did! 🙂 If you do, make sure to check out her amazing blog. Do you want to join in on my Saturday guest post series? Read this, and then shoot me an email at fakingpictureperfect@gmail.com

« Surviving the Dreaded Kid Cold
My Kids Would Be Olympians If…. »