Destruction was an olympic event.

I sat in amazement watching my 5 year old methodically, and quickly take all the cushions off the couch. He seemed almost to be doing it absent mindedly. Like he was thinking, “I’m not sure why I’m doing this, but I must destroy this lovely piece of organized furniture”. It was second nature to him.  He was born with this natural ability for destruction. I calmly replied when he was finished, “Now Kyle, I want you to put all the cushions back on the couch.” I realized he was NOT naturally inclined to put things back together.

And, I was dumbfounded. And, a little bit amazed.

Why was the act of taking them off so easy, but the act of putting them back on so difficult that he would rather go to bed early than do it?

I see this behavior over and over in my kids. Walk over to a bin of toys. Dump it out. Move on.

Walk over to a kitchen cabinet. Take all the contents out. Move on.

Sit down by the bookshelf. Take out every single book and throw it on the floor. Move on.

There is no “playing” going on in these moments. Nope. They are not interested in the books, or the toys, or even the contents of the kitchen cabinet. They are only interested in one thing. Destruction. 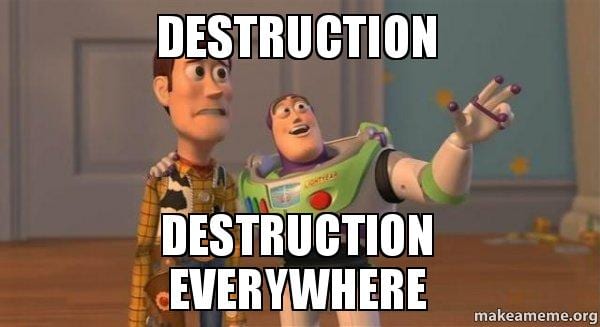 The moment I call for order to be restored to the universe (which usually means their bedroom) the meltdowns begin. It’s like they are hardwired to destroy, take apart, and unpack. But, there can be none of the reverse. Putting things back together has absolutely no appeal whatsoever. Aren’t kids supposed to like puzzles??

If cleaning up were an olympic sport, they would for sure not even make the qualifying round. But, if destroying was, I’m pretty sure they would win the gold. Hands down.

Take for example the legos. Supposedly, my kids love them. But, have they ever actually built something out of them? Nope. I think they genuinely think that the point of the lego bin is to dump it out. End of story. I’ve tried to help them build things. My 7 year old is finally starting to gain interest in building legos, but for the boys? That is not the point. The point is simply dump and run. 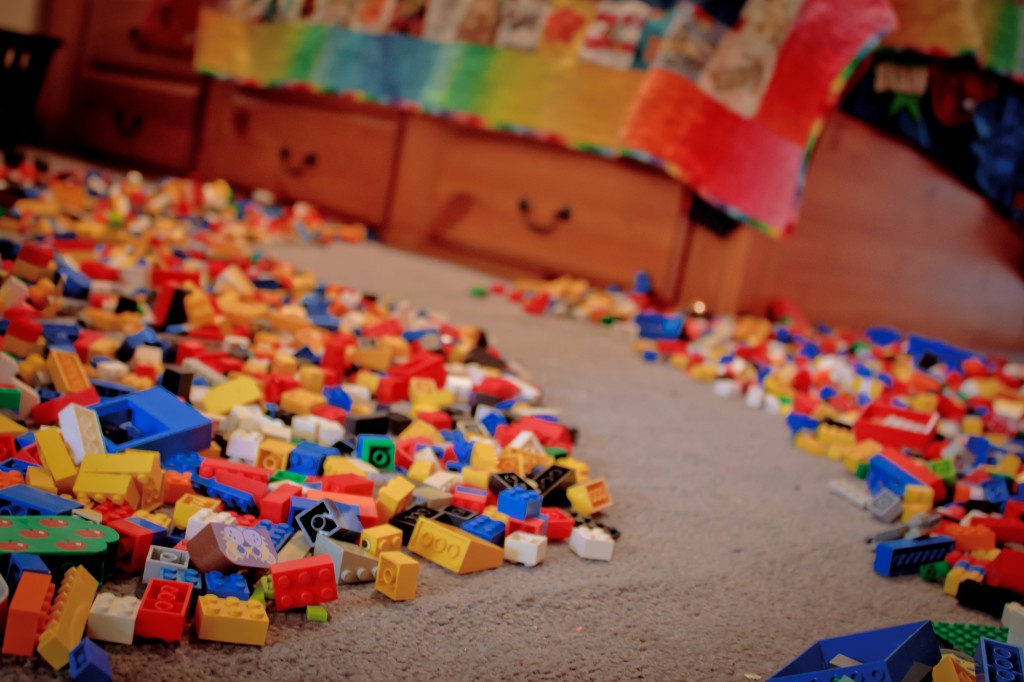 And if absolutely necessary. Make a path where you can walk. (Do not attempt to walk down this tiny path with bare feet. For the love, I beg you not to try it!)

I just do not get it.

Now that I have 3 kids, I try so hard to let go. Yesterday, I let them play with the worst toy ever. 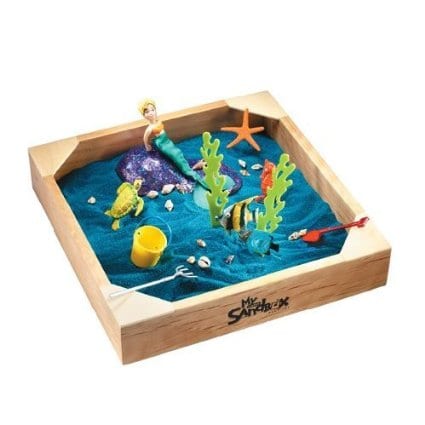 Not only is it an indoor sandbox (shudder) it’s an indoor sandbox with blue sand. I’ve had this thing for years. But where has it been? In the top of a closet high up on a shelf along with other like objects that most parents allow their kids to play with. Yes, it is up there right with the play doh, and watercolors, and GAK. My hope was that they would forget about it. But, stupid me suggested we pull it out when Kyle missed the digging for dinosaurs day at school because he was sick. What was I thinking?

Of course, he became fixated on it as soon as I mentioned it, and I put him off for 3 days. But, after 3 days of excuses, I finally caved. Like a magnet to something that would surely leave a mess, they played with this tiny sandbox on the dining room table for a good 30 minutes. Which is pretty much a record in my house for any type of activity. I tried not to look as the 2 year old used miniature shovels and buckets transferring the beautiful blue sand back and forth and back and forth and probably mostly down his own pants. I took a few breaths and told myself I could vacuum. No big deal. Right? I do own a vacuum. It will all be OK. I own a vacuum. I own a vacuum. I chant to myself as I continue my deep breathing.

I’m still finding blue sand in all kinds of crevices.

So, some days, I can let freaking go. But, other days, I fail miserably. Pre-kids I said I would be the type of mom that all the kids would want to hang out at my house. But, I realize now that when friends of your kids come over, they care even less about the destruction that they are leaving behind. They simply want to look at every single toy that you own. And, to do that, they have to pull everything out as quickly as possible before you put an end to their playdate. This requires speed and agility. It really should be an olympic sport.

Qualifying rounds would be in your own home. How quickly can you destroy the kitchen? The Bedroom? Or better yet, the playroom!?

Then, you move onto the finals where the true skills are required. Destroying someone else’s home that you are not familiar with. The advantage to this is that they care less about the consequences. It’s not their stuff, so surely they won’t have to clean up after. So, they are unencumbered, which lets their true artistry shine. They become fearless. Which, is a trait every Olympian must possess. 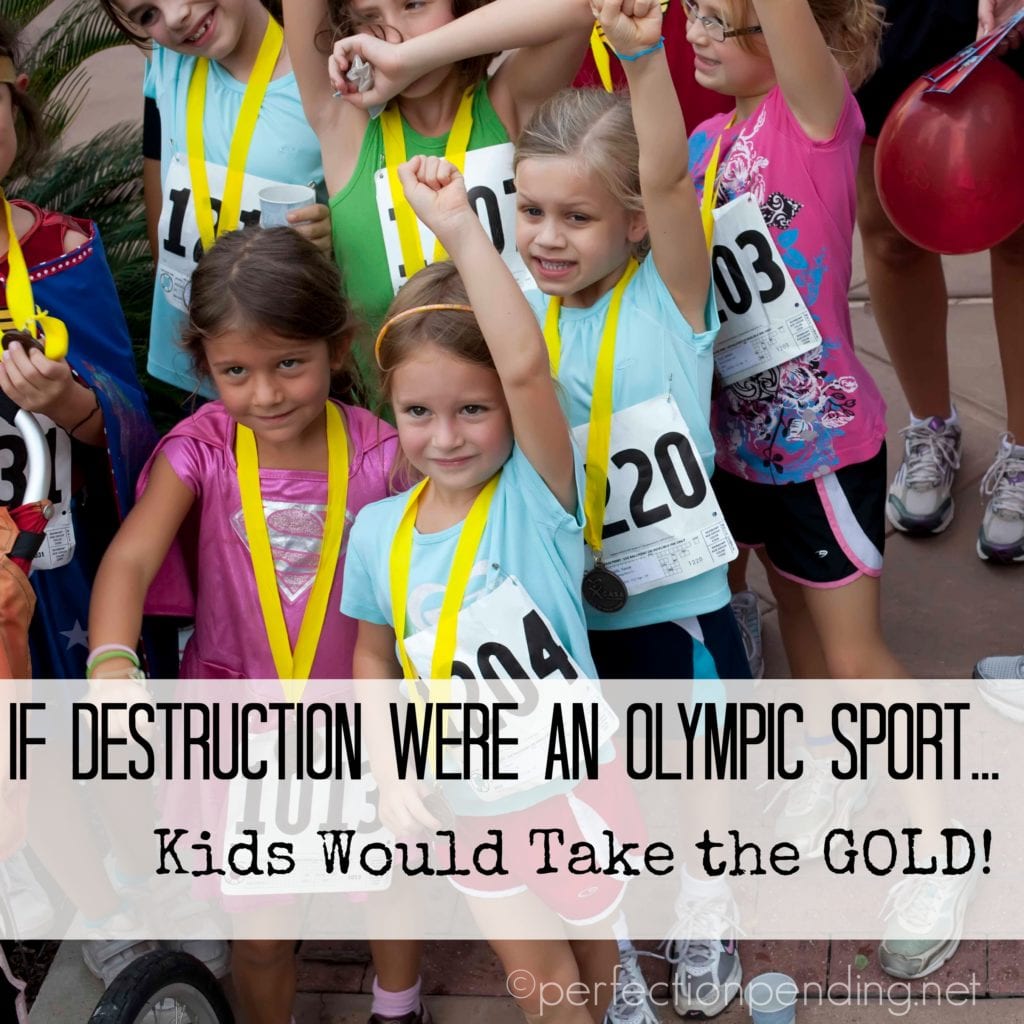 Yes, those kids are the ones that are gifted.

And, if you have one of those kids? Please don’t come over to my house.

What would I win a gold medal for? Freaking out over messes. Hands down.

Link up with us this week with some aspect of parenting that drives you crazy!! Going to join us? Here are the “rules” (Feel free to follow them loosely):