So, as I was making the bed one morning, I realized that my husband’s side looked like he hadn’t slept there the night before. However, I knew he had. Hadn’t he? I began to wonder. The sheets were virtually perfect except for the fold back of the covers he had to do to get out of bed. Then I glanced over to my side.

They were untucked from the bottom of the mattress, strewn around like a tornado had blown through, and surprisingly, I thought it had been a pretty good night sleep. I thought, man, he must not have much on his mind to be able to sleep so peacefully. I kid you not, sometimes, I’ve noticed he doesn’t move all night long.

In a mom’s mind we’re constantly running through worries while trying to sleep:

Am I good enough? Should I be feeding them more organic food? How do I get them to eat vegetables? Why does the four year old cry so much? I am for sure a failure. I should have snuggled them more. I should have swaddled them less.

While Dads are trying to sleep it goes something like this:
I was a great dad today. The end. 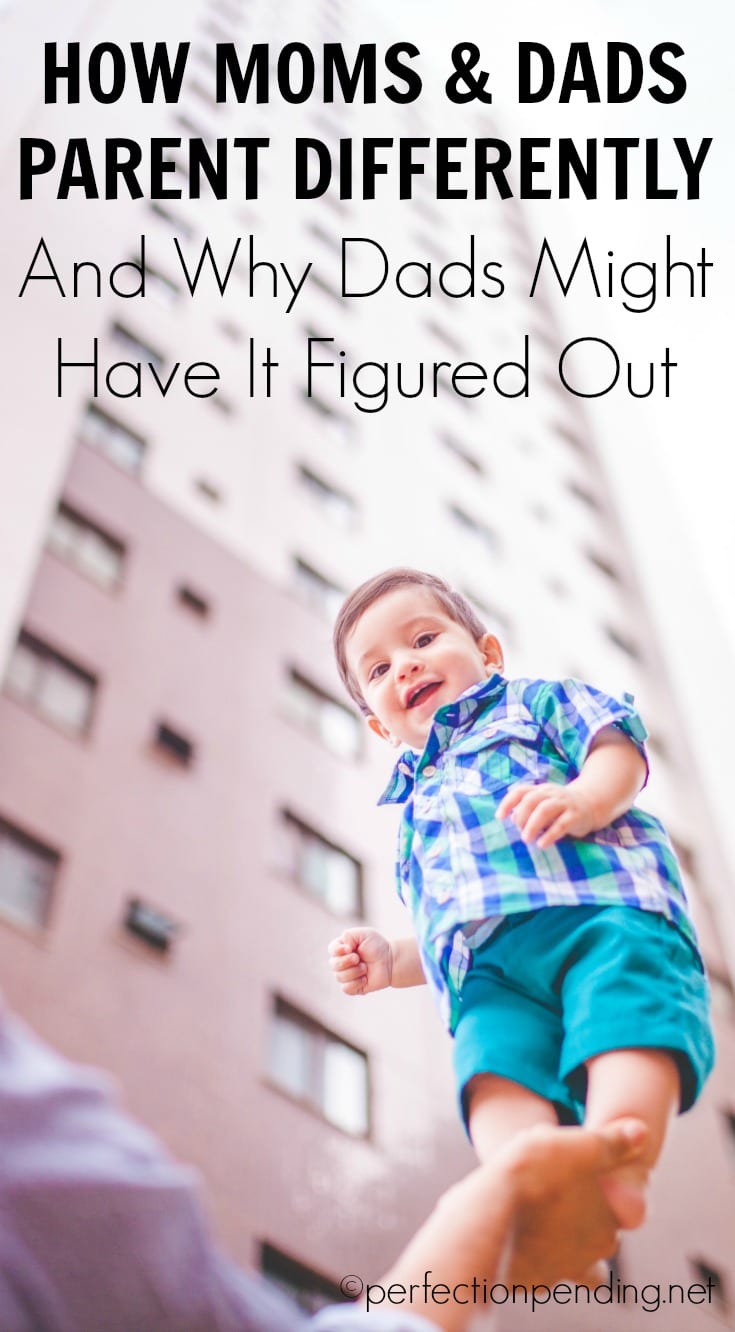 I vowed as I was making his bed that I was going to worry less, and immediately failed 5 minutes later as my kids did something that made me convinced that they would all need therapy as soon as they left home.

I got a glimpse into just how true this graphic is this weekend. I ran out to Target for about an hour to do some last minute Easter shopping. My husband was home with the kids and our 12 year old niece. They were outside playing Frozen, because that is the obvious pastime, of course.

At some point (or so the story goes) the 7 year old comes in and asks him for food coloring. I’m not sure there was much questioning involved. He did admit later that he knew they were going to make medicine out of water, leaves and food coloring. Hmmmm….I have so many questions. If I had been in charge I would have rapid fired any, or all of the following questions first:

In addition to questions, I would have OBVIOUSLY laid down some rules like:

Only the 12 year old can touch it.
You cannot put it on yourselves.
I must see exactly where you will be using this first.
There will be absolutely no ingesting of food coloring.

Who am I kidding? There would have been no rules. I would have said no to the whole idea.

Instead, I’m at Target in a kid-free blissful state and call my husband to ask him a question. He tells me that he’s cleaning up a big mess.

Me: What kind of mess?

Him: Don’t worry about it. I’ll tell you when you get home.

To his credit, he knew better than to break the news to me over the phone that my children had been playing with food coloring.

Instead, I get home and discover that not only had they been playing with it, but at least one of them had decided to drink some mixed with water. The clothes that they had been wearing when I left the house were being gathered for washing, and their hands and faces may or may not have been stained to the point that he couldn’t get it all off.

I guess the red flag should have gone up when he texted me to pick up some rubbing alcohol at the store.

As I tried not to flip out about the fact that my 7 year old had a blue mouth the day before Easter when I had hoped to take some pictures of my kids, he explained to me that the reason why he willingly handed over food coloring to 4 children under 12 was because he “thought it would be fine”.

And therein lies the difference between fathers and mothers everywhere.

“FINE? WHAT MADE YOU THINK IT WAS GOING TO BE FINE??” I really was trying to remain calm.

He could give me no real reason why, in his mind, it was all fine to let children play with food coloring, he did say they all learned valuable lessons.

The 36 year old man learned that you can’t let children play with food coloring unsupervised under any circumstances.

The 12 year old learned that being in charge, and controlling, 3 children ages 7, 5, and 2 was next to impossible when you involve playing with a substance that is usually not allowed.

The 7 year old learned that you can’t drink food dye.

The 5 year old learned that one drop of food coloring can make a big mess.

The 2 year old learned….well….nothing. He had a good time turning his hands all different colors and that’s the end of his story.

As I attempted to psyche myself up for some dyeing of Easter eggs later, he told me that their lessons were actually going to come in handy now. They would be more careful now while dyeing Easter eggs. “See?…. I actually helped you!” he was trying to imply. He said, “My philosophy is to let them learn as they go.” Although, I will add that the “incident” did not prevent the two year old from trying to drink his easter egg dye cup, or putting his hands down into every color he had in front of him.

I cannot tell you how much the control freak in me is bothered by so much of this whole scenario. But, in the end, the blue mouth seems to be fading, and no one will see their hands in the photos, so it could have been way WAY worse.

I’m sure he will sleep great tonight without a thought in the world about the almost tragic food dye incident. I, on the other hand, will most likely toss and turn dreaming about food coloring on white clothes, and all over the living room rug.