Recently, a commercial surfaced by Similac painting every stereotypical type of mom you could think of at the park. The commercial portrayed “the mommy wars” in all their glory. I thought it looked like more of an SNL skit than anything, and found myself laughing at the unrealistic portrayal of so many groups of moms. The working moms were fighting with the stay at home moms.  The EBF moms were at war with the formula mommies. And even the stay at home dads were in the mix.

At the end of the commercial, a baby accidentally rolls down a hill in a stroller, and they all suddenly reunite and are friends because they realize at the end of it that they are all just moms (and dads).

Overall, I liked the message Similac was trying to send. But, for me, I’m just plain tired of this portrayal of moms at war with each other. Because I don’t feel like I’m at war with anyone. And, my guess is that the average mom feels the same way. 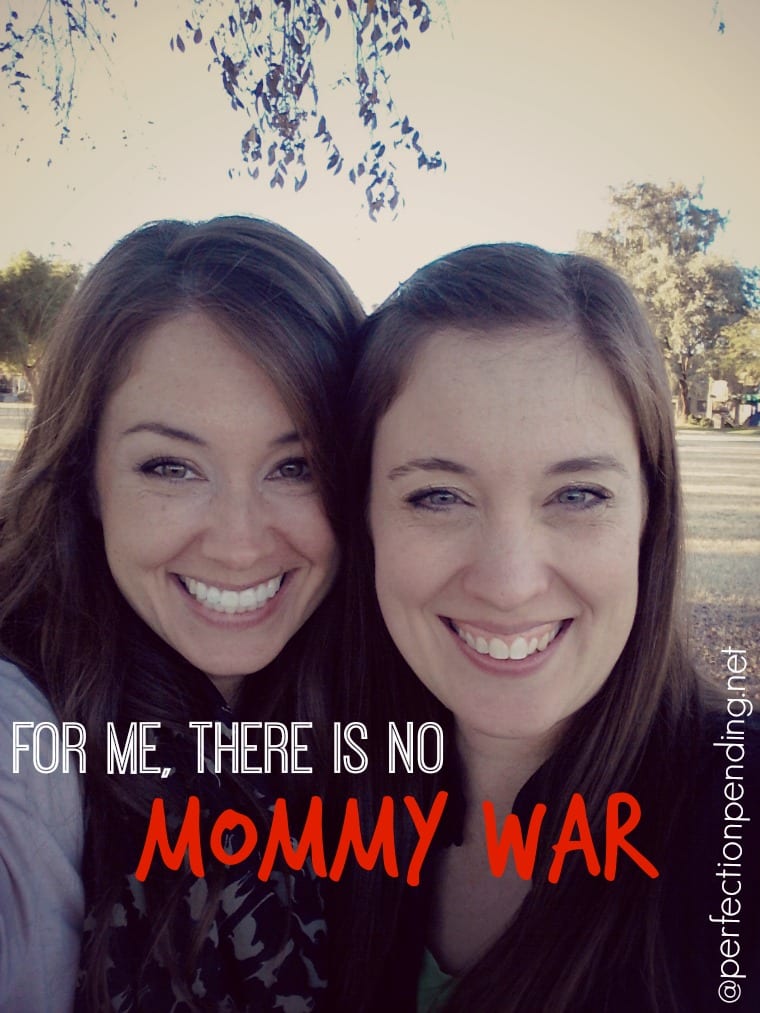 In fact, I think the term mommy wars is overused. Sure, we can see extreme articles written on hot topic issues and they are full of hateful comments that make you think that the “wars” are real. That people really do judge, and spew hate, and say ugly things to people they don’t know. Because they do.

But, I think the majority of moms are not at war with anyone. We’re just doing our own thing. And hoping that we’re getting it right.

But, what about those comments?

I remember not too long ago an article published on Huffington Post called, 16 Habits of Highly Sensitive People. I found myself nodding in agreement and wanting to share with the FB peeps how sensitive I was. But, I held back on sharing that post as I saw several of my friends sharing it.

“This is SO me!” one friend shared.

“This describes me to a ‘T'” another friend would say.

And, I found myself re-reading it and wondering, Does everyone in the world consider themselves a highly sensitive person?

So, since then, I’ve been thinking a lot about the subject of being overly sensitive both consciously and sub-consciously. Especially as it relates to motherhood. In some ways, the article paints highly sensitive people as having better manners, working better in teams, and feeling more deeply. All traits that seem positive, and like something we’d all like to claim about ourselves.

But, there were a few negatives thrown in there too like “prone to depression” check and “crying more easily” check. But the article as a whole painted highly sensitive people as more compassionate, deep feeling people that take time in making decisions, and therefore, maybe are slightly better than those that aren’t so sensitive.

On one hand, I take pride in my sensitivity when it comes to friendships, and relationships. I feel like when my kids are sad, I can be empathetic, and I don’t take it lightly. I don’t like hurting anyone’s feelings, and I like to claim that I’m a good listener, and a good friend. All of which, I attribute to being a sensitive person. That’s the pretty side of sensitive people.

But, being overly sensitive has it’s consequences, too. As a writer and blogger and mother, I read a lot of blog posts and articles on mommy issues.  And, what I keep feeling over and over as I read one article, supposedly in opposition to another, is that we’re not at war at all. We’re all just sensitive.

Because mothering, is something none of us want to get wrong. Period.

Some of us fall into motherhood naturally, while others of us struggle with our own identity crisis of sorts. And none of us want to get it wrong. Because none of us want to mess up these little humans that have been entrusted to us. And ALL of us, just want to make the right choices for our kids.

So we take to the internet, the place that can unite a mother in the Phillipines, with a mother in the United States, and connect them. We can feel in those moments of connectedness through social media that we aren’t alone in this vast world of parents trying to get it right. The fact that someone in another country struggles to get their toddler to eat just like I do. It’s comforting. But, the opposite can take a toll on us in an ugly way.

In the moment we feel connected, we can also feel so alone in our own personal struggle. Perhaps, we might read a beautiful viral blog post or article and disagree 100%, we suddenly feel the need to defend, protect, and speak up to what we believe about mothering. Not because we’re at war. But, because we love our kids. And we want to get it right, and maybe we want to help others feel like they’re getting it right too, even if they’re doing it different.

And, in the technology age that we are raising our kids in, it’s so easy to defend our choice, write about it, or share an article we love. Parents have never had that before now. But, my guess is, that the mothers before us judged each other too. But, it was usually judgment behind closed doors, or maybe a whisper to their best friend about a neighbor, but nothing like moms experience in this day and age because we’re all too accessible to each other.

But, even the moms from the 50’s that may have judged each other still probably didn’t feel “at war” with anyone. They just felt sensitive about a mom doing it differently. Am I wrong? Why would she do that? Should I be doing that too? are questions we might ask ourselves because we’re insecure. We’ve never done this mothering thing before.

Brene Brown, author of The Gifts of Imperfection said,

So let’s be our own true selves as mothers, too. Speak what is true for you, and be real about it. Maybe someone else will be sensitive to what you share on FB, or what you say about your own choices. But, it’s OK to be the mother you were always meant to be.

But let’s not say we are at war with another mom. We may disagree with another’s voice. We may even write about it on FB or in a blog post, but saying moms are at war just doesn’t give moms the benefit of the doubt that we’re all trying to do our best.

And, I think it’s OK to want to get it right. And, we will for sure doubt ourselves in the process. I know I do all the time. But, when we are sure of our choices, it’s also OK to want to speak up about it. In a kind, civil, adult-like way. As long as we remind ourselves as our fingers are flying across the keyboard in frustration, or anger, that maybe we’re just a little sensitive, too. For our own personal reasons.

And, really, this isn’t about a war at all.

« Top 20 Reasons to Put Your Kids to Bed Earlier. Because You Earned It.
Easy One Dish Chicken & Cheesy Broccoli Rice »