I just need psychic powers to feed my three year old. That’s It. No big deal. 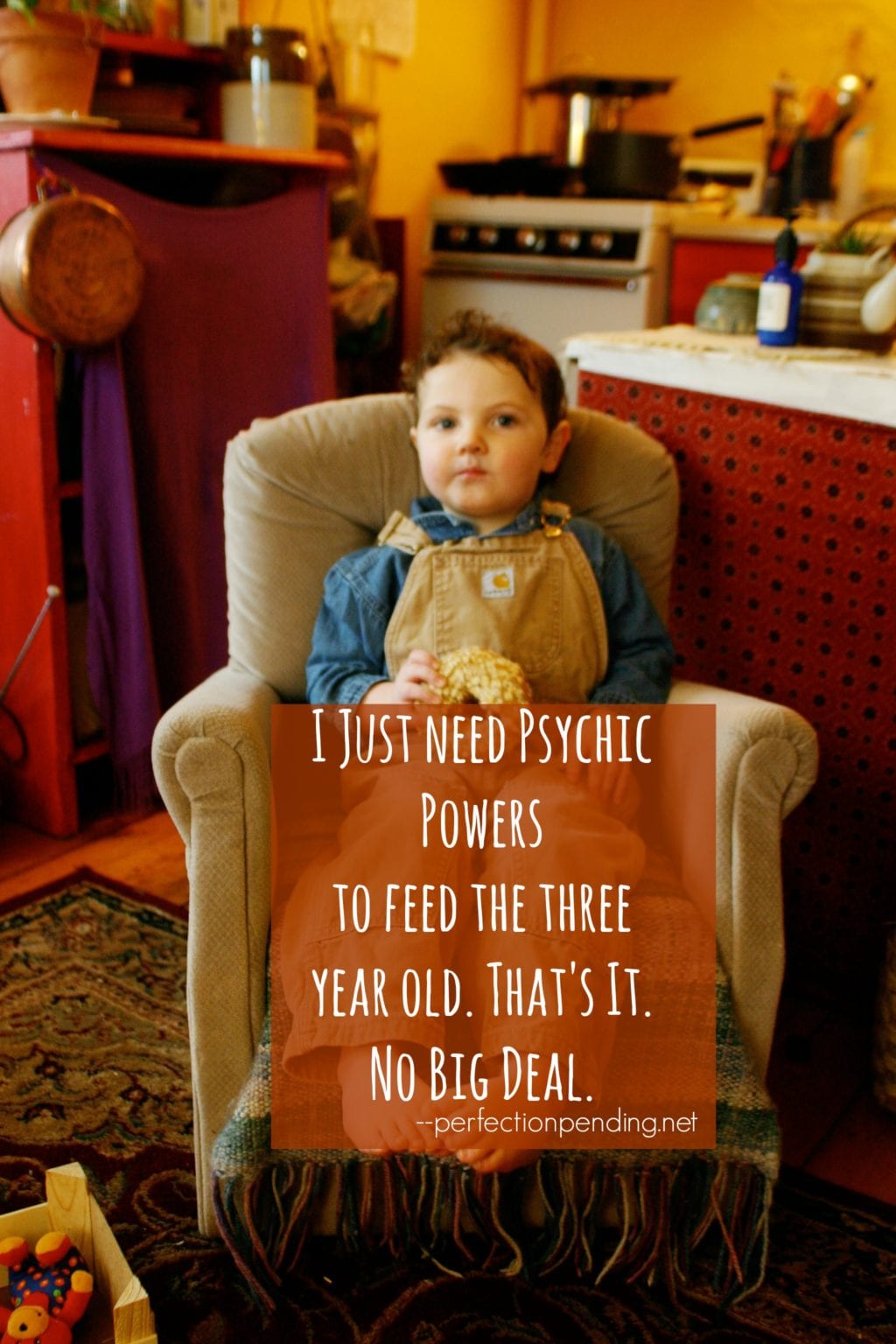 You see, we were doing our usual tango at lunch time. Me, trying to guess what might make the 3 year old happy in the moment, while he quickly refused anything logical.

Then we did the usual argument about how he can’t eat his food because it’s too hot and he spent 10 minutes crying about the fact that his food was too hot, and I spent 10 minutes trying to convince him to take another bite, because, well, it had been 10 minutes and that food was definitely not hot anymore.

And, after that there was the straw debacle where I handed him the wrong colored straw, because heaven forbid he drink out of a straw with a green stripe instead of a blue one.

And, after that, he cried because something “looked yucky” and he didn’t know what to do with it because it was on his fork, and it certainly wasn’t going in his mouth, and please for the love mom, do something about this totally normal food that looks slightly weird, because I’m three.

And, meanwhile, my 6 year old was scarfing down giant sized portions of food because he’s my favorite.

And, then we had the catastrophe of the minuscule onion that was mixed into his pasta sauce and he detected on his tiny miniature sized 3 year old tongue like he was a professional wine taster or something. Gagging started.

And, when he refused to eat anymore because of things looking yucky, and imagined food temperatures I may have accidentally straight up lost it because food is essential for life, and I want my kid to live, and apparently, that is not a high priority for him.

So, I did what any sane mom would do and declared to “just get down then and don’t eat then!” and he threw himself on on the floor in a heap, and I thought to myself, “If only I was Sylvia Browne.”

You remember her, right? Montel Williams? It always went something like this:

Audience Member: We lost our dear daughter and we just want to know how she died.

Sylvia: Well, I’m sensing that there was a man in her life…with the letter B.

Sylvia: Yes, Bob. He was involved.

Audience Member: But, Bob was her pet chihuahua.

Sylvia: You see, there was this other man there. And, Bob saw it all.

Audience Member: Thank you so much. All our questions are answered.

You see, if I was a psychic, there would be no games. I could figure it out. SO easy.

Because every meal, I approach with optimism, and end it looking like my head just spun around three times like something out of the exorcist. Because meal time is supposed to be fun, and nourishing, and full of cute characters we carve out of cheese, and other warm fuzzies. Except when it’s not. And, we cry in the bathroom to avoid running away forever.

Feeding a three year old is no freaking joke. A typical meal goes something like this:

Me: Time for lunch!

Me:  How about a bagel and cre

Me: Hands him a bagel and cream cheese.

Me: But, you said you wanted a bagel.

Me: So what do you want? A waffle? Noodles? Nuggets? Hot Dog?

3yo: I want a bagel sandwich.

Me: What’s a bagel sandwich?

3yo: I WANT A BAGEL SANDWICH!

Me: But, you have a bagel. I don’t understand.

Me: You want cheese on your bagel with cream cheese?

Me: Hands him a slice of cheese, Is that a bagel sandwich?

Me: Will you please just eat your bagel?

Me: Sorry, I’m not making you a sandwich. You can eat what I made you. You told me you wanted a bagel!

3yo: But, I want a bagel sandwich. (Sobbing)

Me: Will you just please eat!?

Me: Here! (puts two pieces of bagel together) Is that what you want?

3yo: Eats entire bagel in 5 seconds.

Psychic powers. That’s what I need. Because, sometimes I feel like I’d rather die a million deaths than try to figure out what the 3yo wants for another meal. And, now I need a nap.