One of the most naive things I ever said in my days of being young and single was that I wanted to have 8 kids.

I’ll let those of you who read my blog take a moment to laugh hysterically at that one. I’ll just say in my best southern voice about my pre-kids, pre-married self, “Bless her heart”.

But, at the time, I truly did believe that all I wanted in the entire world was to get married, and start popping out babies. But, over the next few years after that endearing statement, I got wiser, and got to know myself a little bit better, and started to realize my expectations, although cute, weren’t really….me.

Growing up as a Mormon, I have always believed, and still do, that we were put on this earth for a specific plan, and purpose. Part of that purpose is to have families. While Mormons aren’t anti-birth control, it’s definitely taught quite regularly by church leaders that children are life’s greatest blessings, and that we should have as many as possible. So, a part of me always thought that having lots of babies was not only what I would do, but what I should do.

Fast forward a few years, when I had my first born. I was almost 29 years old, and excited to become a mom. Little did I know how it would change me for the better, and cripple me with the ugliest parts of motherhood, including postpartum depression and severe anxiety. After three babies, I thought about my pre-kids, pre-married self, and thought, Who did she think she was? 8 babies? Never.

The issue isn’t with doubting my choice to have “only 3” it’s that I wish I could have more, but I know my limits. And, that’s sometimes hard to say out loud.

One day, I was texting my sister that I felt like everyone around me was announcing their next pregnancy. While I wasn’t jealous, because I truly feel like my family is complete, I felt sad for the fact that I was at my limit. That for me, it was time to stop popping out babies. And, that maybe there was something wrong with me that I couldn’t handle more.

She said something though that totally reaffirmed the decision I had already made in my heart, that I knew was right. She simply said, “Don’t think about it for more than a second. Just work on the ones you’ve got!”

And, I remembered the saying, “Comparison is the thief of Joy.” 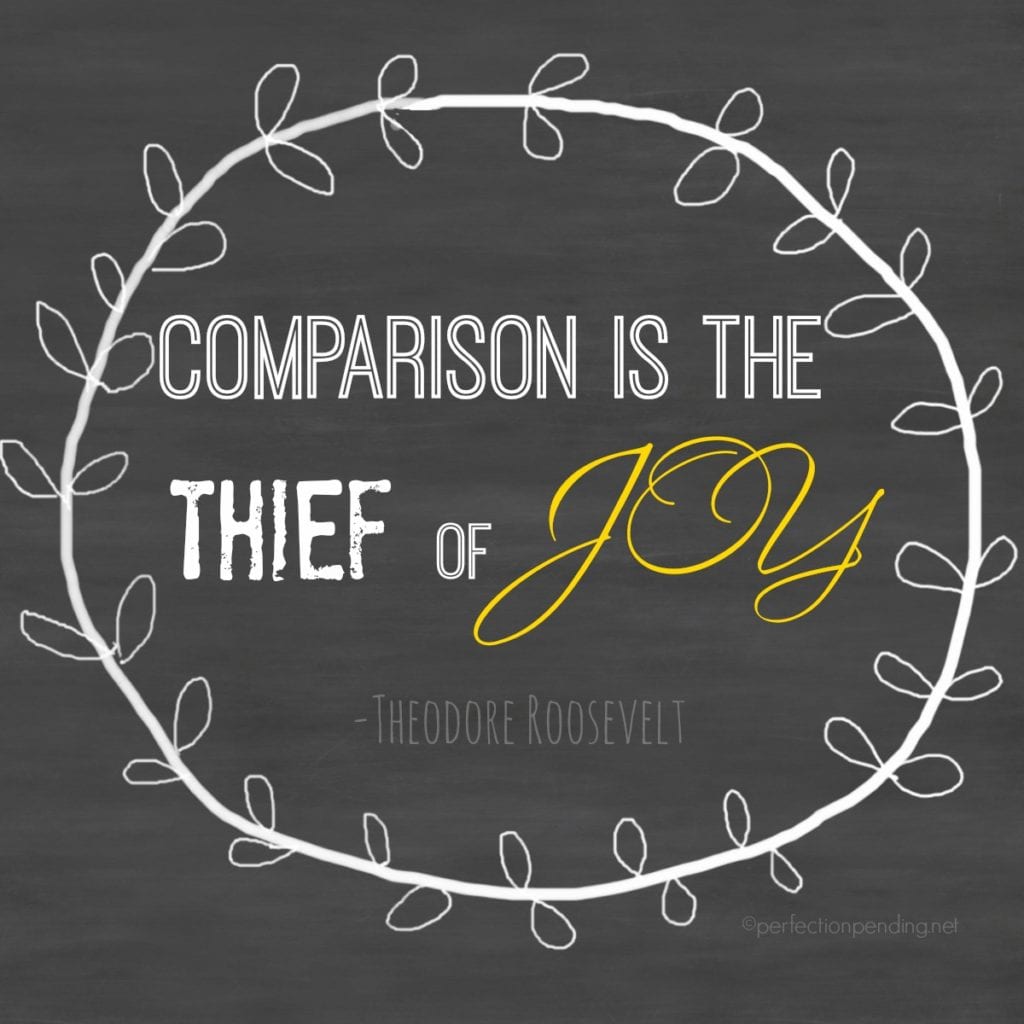 I have three gorgeous children that I’m constantly worried about messing up. But, I know I’m getting it right sometimes, too. And, I was feeling sad for what reason? To keep up with what everyone else was doing? Because they could handle it and I couldn’t? Because there was some unwritten rule of how many kids I should have as a member of my church?

She was absolutely right. I need to shift my focus and concentrate on the three I had and forget about what everyone else was doing.

Then, one day, I was talking to another Mormon mom with two beautiful little girls. She and I started opening up about the stresses of being parents, and how it was harder than we ever thought it would be, and she confessed to me that she knew her limits, and two was enough for her. I was so grateful in that moment for another mom that was brave enough to admit her own limits, and accept them openly without shame. I was SO glad she told me how she felt, because I felt so much less alone.

I’m grateful for the self-awareness that I have gained as a Mom to know my limits, and stop comparing myself to what others are doing. Because I am good enough. And, I’m beyond blessed to have the three that I do. I can’t wait to see who they become. And, I’m not looking back on the what ifs for another second.

I wrote this post as part of a So Glad They Told Me campaign by my blogging friend, Stephanie at Mommy, For Real to share the truths about the parts of parenting that are hard. She asked other mothers to speak out about things that they wish they had been told, or things that they were told about motherhood that helped them.

She asked us to take selfies of these things for part of her campaign, so I thought I’d share mine. 🙂 I truly am grateful that I’ve realized that motherhood isn’t a competition, but we just need to have more confidence in ourselves. #SoGladTheyToldMe 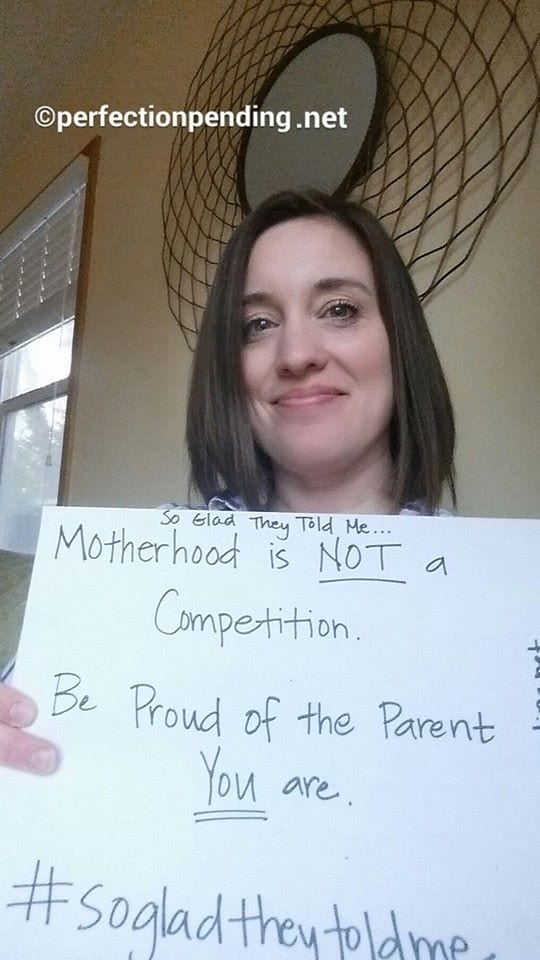 And, here is one more that  I hope all mothers can realize: 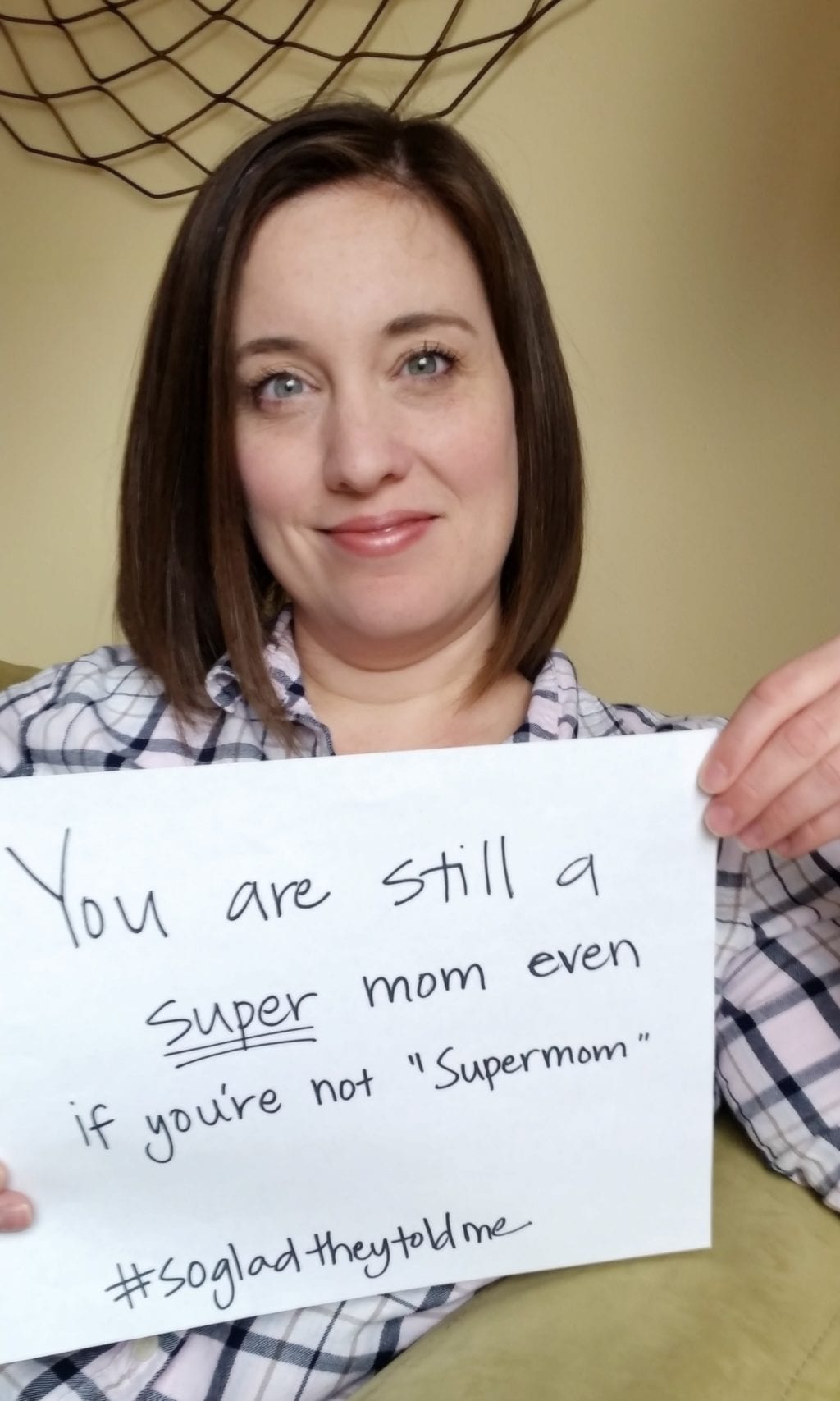 What is the piece of parenting advice that YOU received that you’re so glad you know? Or what is something you wish you would have been told?