Right after the pandemic revved up and we were staying at home for days on end, I noticed a change in my kids immediately. It was anger. Suddenly I was living with a bunch of angry kids.

There were outbursts, and tears, and frustration that were bubbling up every day. My youngest who is my happy go lucky almost always happy child was no exception.

I knew the culprit. It was the lockdown. Everything in their world had changed. And yet – there was nothing I could do about it.

I felt so much helplessness when I had to tell them they couldn’t play with friends, or had to explain why we had to wear masks now when out in public.

But, what I was most surprised by was that my kids were not sad. They were angry.

It’s easy to look at their little faces and wonder what is going on in the heads of our kids. Especially the little littles.
Instead, we usually see things like tantrums, fighting, and refusal to do what we ask.

There is a lot going on in the world right now. And the world of our kids has been changed. Maybe forever.

I try not to go down the rabbit hole of long lasting effects all of the turmoil of 2020 might be having on our kids. Even though I worry about this quite often. 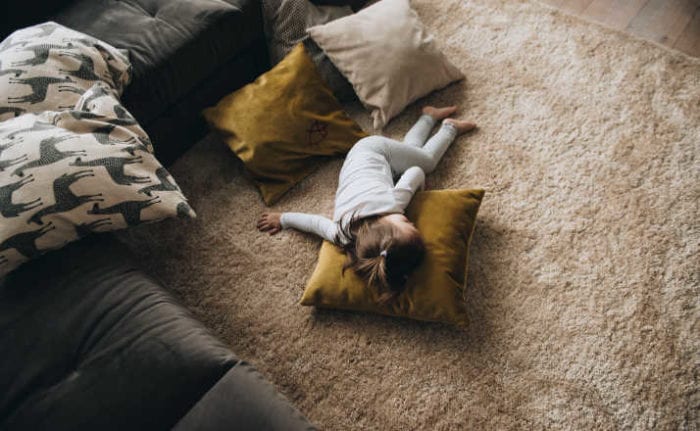 Instead, I’m focusing on one thing right now – recognizing that kids are human. And it’s OK if they are angry kids right now.

So often I have felt shame around my own anger, but as an adult, I’ve realized it’s a valid emotion. And it’s OK to feel it. Obviously we don’t want to stay in that head space all the time, but anger as a kid is normal. Especially right now.

Kids have had to cope with having their schedules changed, their friends ripped away, homeschooling, and the stress that their parents are either consciously or subconsciously bringing into the home with all of the current events in the world.

We sometimes forget that these kids are human. And they need to be allowed to FEEL just like us.

“So often, children are punished for being human. Children are not allowed to have grumpy moods, bad days, disrespectful tones, or bad attitudes, yet we adults have them all the time! We think if we don’t nip it in the bud, it will escalate and we will lose control. Let go of that unfounded fear and give your child permission to be human. We all have days like that. None of us are perfect, and we must stop holding our children to a higher standard of perfection than we can attain ourselves. All of the punishments you could throw at them will not stamp out their humanity, for to err is human, and we all do it sometimes.”

When I first heard that quote it was a lightbulb moment that changed my parenting. Punishing for having feelings is not the answer.

Having angry kids will happen. Because they’re human.

I think adults often want to use the excuse that kids are resilient. While I agree that for the most part they are, I also think it’s kind of an excuse to not let kids have their emotions. If we say they are resilient then we negate the feelings they are having by saying more or less – eh, they’ll get over it.

But, y’all. This is hard right now.

Our kids HAVE to be internalizing our stress. They have to notice our whispered conversations about current events. They know about George Floyd, and people dying from a pandemic. They see their worlds changing inside and outside of their homes.

Just like our freedoms and comforts have been upended, so have theirs.

I don’t know about you, but it’s been harding navigating the minefields that are the tender feelings of my kiddos right now. I never know which child I’m going to get in any situation. It’s gotten easier since we stopped homeschooling, but there is still so much going on in the world right now it all feels like a lot.

And, I’m angry sometimes because of it. So, why shouldn’t they be allowed to be angry, too?

My point is this we have this amazing power right now to validate the feelings of our littles. I bet behind the tantrums, or disobedience, or anxiety there is another layer to peel back and discover.

Let’s not skip over them. Even the ugly, angry ones.

Kids need to know that it’s ok to feel them. Whether it be anger or something else.

The more we can allow them to feel their feelings, the more we will be working tiny miracles in their little fragile hearts.

« Can This Be The Year That We Are Done With Fake Influencers & Toxic Positivity?
No, You Don’t Just Get 18 Summers With Your Kids »