Recently, someone said to me, “You’re making parenting harder than it is.” As much as I think I’ve chilled the heck out after having 3 kids, I knew she was right. And, as I’ve been overthinking that comment, my guess is that I’m not the only one fighting the urge to helicopter the crap out of parenting, while simultaneously cringing at the freedoms I am giving them. Parenting today is so hard. But, are we making it harder than it has to be?

I immediately thought of a few areas of, let’s say…improvement on my part. Instead of constantly putting pressure on ourselves, let’s take some off. Sounds nice doesn’t it? Here are a few things I’m going to stop doing that’s most likely making parenting way harder than it should be. 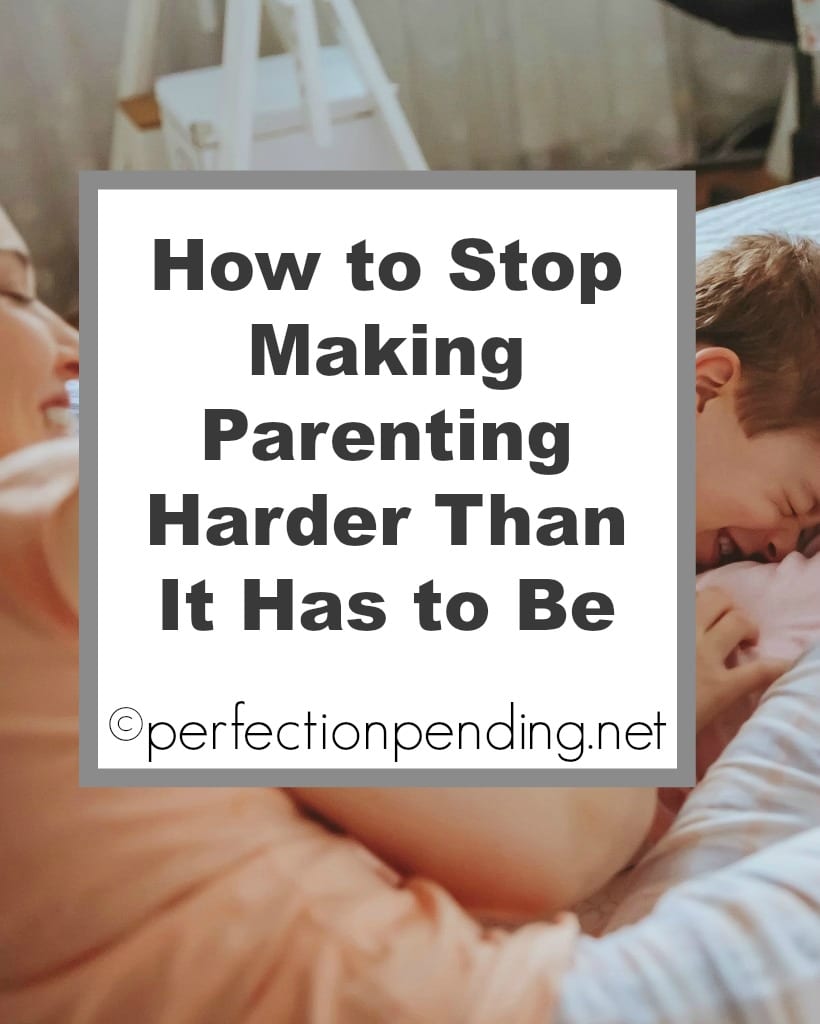 I’m going to stop having anxiety attacks about my kids’ bedrooms (and the rest of the house).  I kid you not, I can walk by the door of one of my kid’s bedrooms, and feel my blood pressure rise almost instantly. I have to deep breathe in order to resist the impulse to pick up their dirty clothes for them while they’re at school. I think if I just had one more pretty organizing bin life would be perfect. But, now I’m going to make life easier by just shutting their bedroom doors when I walk by. Problem solved.

I’m going to stop forcing my kids to eat and sleep. I remember one time when my middle child was fighting nap time feeling SO frustrated. I tried everything I could to get him to sleep including spending half an hour rubbing his back. Which we all know ain’t nobody got time for that. Then, a friend reminded me, there are two things you can’t force a kid do to. Sleep and eat. So, if the 3yo wants to stop eating after 2 bites of dinner, I’m going to let, the freak, go. If he’s hungry later I’ll push that plate back under his nose and smile as I say, “eat.”

I’m going to stop expecting them to care as much as I do. Sometimes I forget that I’ve been on the earth 29 years longer than my oldest child. Of course she’s not going to see the value in keeping her room clean yet. And, when my middle child is 13 he isn’t going to care about his grades as much as I do. I have experience that they don’t, and kids just have to learn by facing the consequences sometimes. Like the rest of us did.

I’m going to stop trying to make life look more artistic and beautiful and perfect.  Social media is a big part of our lives. But, sometimes it makes me feel like I’m in a contest for the prettiest life. I did that once. it was called high school. I see the artfully crafted instagram photos of kids, or the cute first day of school signs and think, “I’m not a good mom if my kid doesn’t lay down on the sidewalk while I draw 1st day of 3rd grade around his body.” I think in all the childhood photos I have of myself there is one first day of school photo. ONE. There was no sign. It was just a picture of me holding a pencil box on my first day of 1st grade. The rest of the years, my mom probably kept it more simple and didn’t try to take a picture of every second. Save your sanity, snap a picture so you’ll remember, and move on. Life is beautiful without all the extra filters.

I’m going to let them entertain themselves. Aside from the times when my kids are really whiney and tired, they really do play well together. And use their imaginations. Imagine that! I’m making life harder by over scheduling and planning events everyday. So, I’m going to push them outside and say “go play” more often. Then I’m going to sit inside and have a freaking moment to myself. Doze off, read a book for 15 minutes, think straight.

I’m going to stop judging myself. One thing I’m realizing is that I’m my own harshest critic. Most other people don’t care how I’m raising my kids. The only person that has set the bar too high is me. And, when I can’t reach it, I feel guilt like I’ve doomed them to a life of therapy. I’m going to stop saying I should have and instead, embrace whatever I did accomplish that day. Even if it was just biting my tongue and not rolling my eyes.

The truth is, parenting is hard enough just like it is. Without all the crazy expectations my generation is constantly throwing into it. I think a lot of us are making it harder than it is. But honestly, our kids are going to keep growing even if they don’t eat, they’re going to make mistakes even when we do everything “right”, and they’re definitely going to survive. And, so are we.