It happened not long after my third kid was born. I adopted a new attitude. A mantra if you will.

Suddenly, I had to let go of it. Like, all of it. The control freak in me was still there, but she could no longer control everything because she has more kids than hands now, and that was it.

A little (super annoying) part of me died. But, honestly I’m a better parent because of it.

So, I adopted the third kid rule. Which is kind of like the five second rule, but for kids. When you have too many. And can’t stop the chaos. If first-time mom me ran into third-time mom me, she would be horrified.

The other day a neighbor texted me:

Neighbor: I saw you drive by. I know my kids were outside playing, but I was watching out the window.

Me: (why is she even texting me this?) You don’t have to explain yourself to me. Ever.

Neighbor: Yeah, but my youngest is pretty young to not be right beside me.

The third kid rule is a mantra. And the mantra is basically this: Eh.

Doesn’t want to wear shoes or a jacket? Eh. He’ll tell me if he’s cold.

It’s a great mantra for all the things really. I didn’t bake cookies for the PTA? Eh. I have three kids.

We forgot a project was due today? Eh. They’ll turn it in eventually.

It might be seen as lazy to some, but to me, it’s seen as a survival skill. My house became exponentially more noisy with each kid, and by the time the third kid came along, I was lucky if I could hear myself think.

My house became more messy, and chaotic, and frankly more chill. And chill is not a bad thing when you’re a perfectionist. Chill is a glorious enigma to the perfectionist that only granola-y moms who shop exclusively at Whole Foods have. Until you have three kids. Then chill is suddenly a likely response to broken glass, and injured bleeding foreheads, and packed schedules. It’s a survival skill for tweens screaming in your face, while toddlers pee on the floor and the middle child did what at the neighbors house?

Shrug and say, “Eh. Third kid.” is all you can do when life suddenly blesses you with a colicky infant and two older kids to take care of. After all, now you have more kids than hands, so what can you do some days? 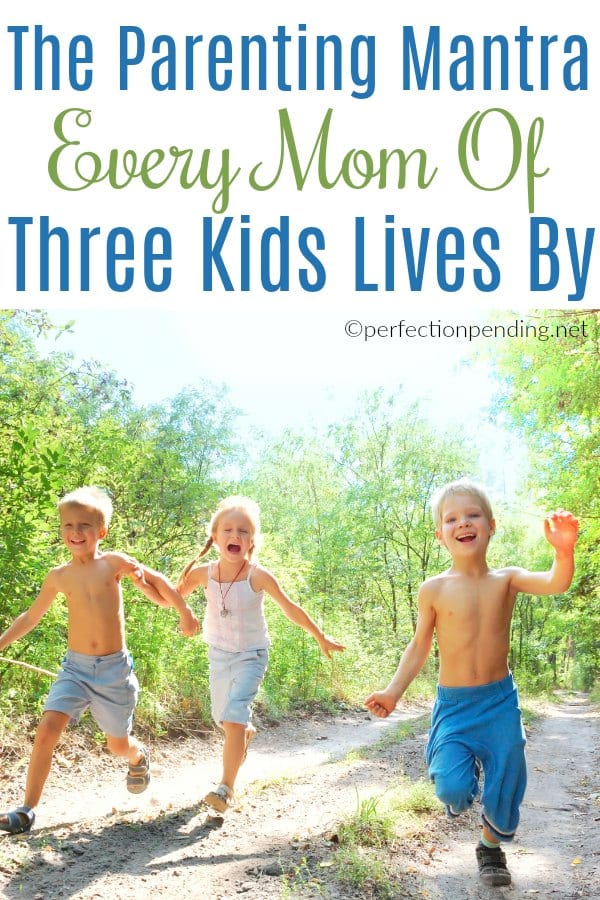 I’ve realized too that having three kids has pushed me over an edge that I wish I would have fallen over a long time ago. I wish that I would have learned sooner to let go. Give in. Say yes. Do crafts with glitter. Say no. Pray more. Think less. And surrender to the chaos and just enjoy the messy moments more.

It’s a relief really to have gotten here, and I’m happy to have finally learned to let go a little more.

Now to those of you that are blessed with more than 3. I have a few questions: