My guest post today comes from Moira (which, don’t you just love that name??) who shares her journey of becoming a mom. Like many of us, it didn’t happen how she thought it would. She is brave because she took the step to adopt even though she wasn’t perfect. GASP! Can you believe it? I love her thoughts on motherhood, and she shares yummy recipes and all kinds of fun stuff on her blog. You should totally check it out. If you want to be part of my Be Brave Guest Post Series, go here.

For a really long time I didn’t think I wanted to be a mother. I liked kids, I just wasn’t sure what to do with the little ones. My husband and I were still young and it was much for fun for us to visit with babies and then give them back when they cried.

Soon enough, our siblings and friends started to have children, and I realized how much I enjoyed being an aunt. Suddenly I really did want to be a mother after all.

As long as it had taken me to make up my mind about motherhood though, our road to becoming parents would take much longer. Fate sure does have a sense of humor!

Like many people we had talked about adoption as something we wanted to do “someday”. For some reason I had it in my head that I needed to know what I was doing as a parent before I could adopt. We decided to get pregnant…and then we couldn’t actually get pregnant. There were so many tests and none of the doctors could figure it out. They laid our options out for us, but it would mean lots of medical procedures and lots of uncertainty. We talked about it. We took a break from “trying”. We did what we needed to in order to think. I read books and baked, he flew airplanes. At the end of it, we realized that continuing down the same path wasn’t doing us any favors. We weren’t hopeful or excited anymore.

I started a consulting job around this time and it turned out my boss was an adoptive mother. I shyly asked her if we could talk about it, and she promptly took me out to lunch and talked my ear off. Somehow, without even realizing it, we were excited about parenthood again. We had hope.

The paperwork needed to complete an adoption is mind-boggling. It’s all absolutely necessary to ensure that each child finds a home with the right family but the sheer volume of forms is not for the feint of heart.

I loved the paperwork. Every inch of forms felt like an inch closer to being matched with a child, and it was the only part of the process where I was in complete control. We zoomed through it…only to be forced to give up all control as we waited. And waited. And waited.

Looking back, that paperwork was the last time I was truly in control of any part of raising children. Learning to let that go is still my biggest struggle as a mother.

Perfect example: my first moments with my child. I envisioned a beautiful moment as we took him into our arms and he snuggled in close.  Knowing me, there was probably a string quartet playing our soundtrack and a majestic sunset in the frame.

Reality, of course, was nothing like that. My oldest really did snuggle into me as I took him into my arms and then immediately followed that with a massive diaper blowout. I found myself in the bathroom at the Philadelphia Airport doing my second diaper change ever, while my poor husband anxiously attempted to figure out the car seat. It was a true trial by fire, by the way, as that is still one of my top five worst diaper changes, even after two children. (Everyone keeps a mental list of traumatizing diapers, right?!)

Now I have two adorable, crazy, smart, loving little boys and they make me so happy that I literally feel like my heart will burst sometimes. Every step of the way they challenge me and I have done much scarier things than change a poopy diaper, no matter how brave that was for me at the time.

Some days being brave was standing up to a school not willing to give my youngest the extra services he needs.  Some days it’s realizing that my oldest is now an independent kindergartener and needs to make his own mistakes sometimes. Some days it is as simple as letting them climb just a little higher than I want them to on the jungle gym.

This is why I connect so much with this series. I love reading about how motherhood pushes us all a little past our comfort zone. I had no idea how much my children would change me for the better. I am so much stronger now…and slightly more comfortable with the chaos 🙂 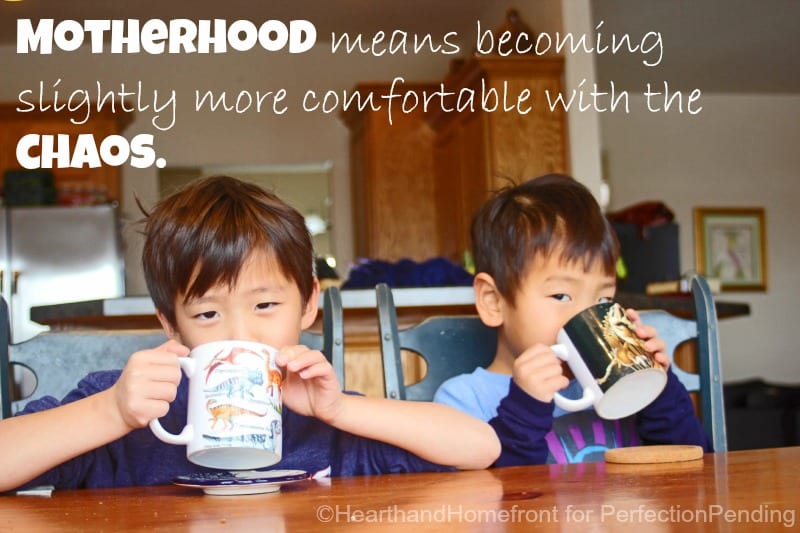 Thanks so much to Meredith for letting me share my story! For more adoption information, check out my post for National Adoption Month here and favorite adoption books here. 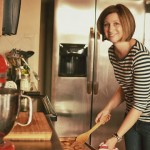 Moira blogs at Hearth andHomefront, sharing her love of great food and great books. When she’s not cooking or reading, you’ll find her running (very slowly), chasing her two rambunctious boys, and attempting to be craftier than she really is! For now home is Oklahoma, but as an Air Force spouse, she’s always looking forward to the next adventure! You can find her on Facebook, Twitter and Instagram too!

« Why All Companies Should be Marketing to Preschoolers
The Founder of Mother’s Day Later Renounced It. And Other Reasons to Let the Handmade Card Be Enough. »