My Dad grew up Jewish in a Catholic neighborhood. His parents owned the corner store, making him a popular kid. His mom would give him a piece of salt water taffy or a cherry licorice dollar to share with any kids tagging along with their harried mothers.

My Dad tells me he knew he was Jewish, but that didn’t mean much. He was just like the Christian kids. He liked stickball and looking at Green Hornet comic books. And he was just as rich as they were, meaning not at all. My Dad was born in 1927, so his childhood knew no extravagance.

Unlike today, the Christmas season then didn’t start after Labor Day, it was closer to mid-December. But if there was a time of year when he felt a little different, those weeks after Thanksgiving would have been it.

One year, my Dad was likely five, he was playing outside after Christmas. He remembers there had been snow the night before — just a dusting, but enough that his Mom told him to wear boots and gloves. He thinks he must have been on his way to his best friend, Patrick Maloney’s house. But on the way there he saw something astonishing. Lying on its side at the corner was one of those beautiful green fir trees that all his friends seemed to have. It couldn’t have been very big, and it was likely losing needles quickly, but to my Dad’s innocent eyes, it was a thing of beauty. Forgetting his friend, he grabbed the scrawny tree trunk and pulled the shrub behind him the half block hike to his house, up the three concrete stairs to the front door. It was awkward trying to pull it inside so when he got it partway in he called for help.

His Mom found him tugging at the tree, pine needles scattering throughout the tiny front entrance and she yelled, “Get that thing out of the house.” And that astonished him — just as much as the great fortune of finding the tree, free for the taking, right at his own corner.

My Dad laughs at the story now, but I can imagine his sweet five-year-old self gulping back tears as he was made to drag the tree back to the corner. “I didn’t know why my Mom was upset. I didn’t realize we didn’t have a tree because we were Jewish, I thought it was because we were poor.”

My kids understood their connection to Judaism more, perhaps. Maybe it was their Jewish preschool. But, like my Dad, they grew up with Christian neighbors. There were three families in a row and the eight kids only spanned about five years. Front doors were left open and footballs were dropped off in one yard and then left in a different yard the next day.

One December afternoon, my two older boys were not at our house, which meant they must have been at one of the other homes. I was enjoying absolute quiet as the baby napped — until the phone rang. My neighbor Lisa struggled to say something, but each time she began to speak, she fell back into hiccups of laughter. Finally, she put my oldest, then about four, on the phone.

“I want permission, Mom,” he said. “We’re making a snack and I don’t know if I should eat it. “
I was congratulating myself on having raised a son who would turn down one of Lisa’s famous “little snacks” which likely included a full-size candy bar chopped over ice cream and doused in fudge. But it wasn’t the gluttony he was opposed to, it was the final product.

Lisa had cut pieces of toast diagonally and slathered them with peanut butter. She added two milk duds for eyes, a red hot for a nose and two twisty pretzels for horns. Ta-da! A reindeer.

Unlike my father who wanted to pull Christmas into his house kicking and screaming, my son was afraid to even nibble at a holiday that wasn’t his own. I reassured him sharing pretzels and peanut butter, no matter what shape it was in, was a fine way to celebrate our differences and come together in neighborly love. I also reminded him to wash his hands after playing outside. (Being a mother is a never ending vigil.)

My husband probably has the most unique Decembers of any of us. He was raised Catholic and celebrated his first two decades of Christmas about how you’d expect, with magical, twinkle-lighted trees and charming toy train sets. It wasn’t until he approached his thirties that he converted so our family would share one faith.

Formerly being Christian at Christmas is a mixed bag. Hanukkah is a lesser holiday in our religious calendar so that means we don’t shell out big bucks on holiday spending, which he likes. We also don’t have the high expectations that Christmas seems to bring. But something is definitely missing for him.

When his parents were alive we shared in their celebration. Since their passing, we usually go to a Chinese restaurant and for a movie. (Yep. It’s not just a thing in movies.) He has told me that he does feel a bit adrift from the traditions he grew up with and from most of the rest of America’s traditions.

One Hanukkah years ago, we had all the kids at Target. Instead of giving them each a gift that night, they got to pick a toy to donate to the Santa Anonymous box at the entrance to the store. To get to the toy section we had to meander past the fantastic Christmas department. Six hundred square feet of light, color and magic. A row from our destination my husband stopped the kids and said animatedly, “Here’s our endcap!”

About three feet wide stood a collection of menorahs, candles, dreidels and Hanukkah gelt. Nothing too tempting. We all shrugged our shoulders and moved on, no one sobbed, begging for a tinsel covered Star of David. 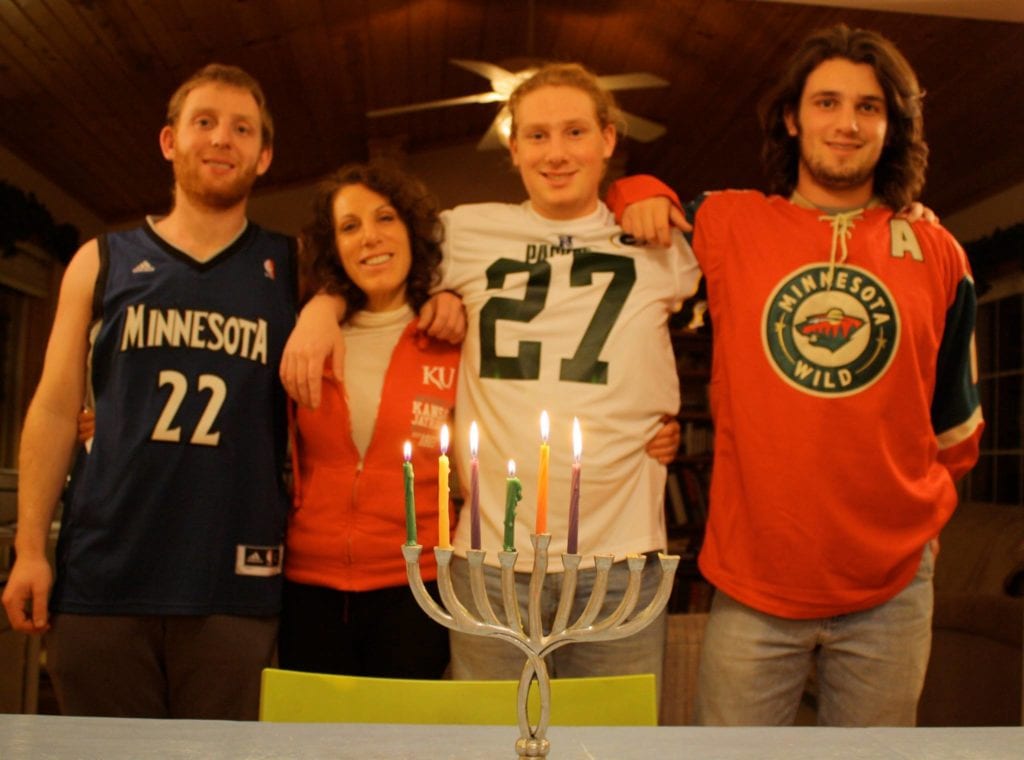 Because I didn’t grow up with Christmas as my holiday, I can’t claim to understand what December feels like for my husband. Having nearly adult children now, we can share what Thanksgiving feels like – a rushed holiday eve when every person my kids knew in their childhood returns home and they all squeeze into the bar half a mile north of the high school. They repeat this the night after Thanksgiving, too.

Recently my husband rethought Christmas. “I like how everyone else is busy so we get the boys all to ourselves,” he told me.

Often, December can feel like standing outside the magical perfection of a snow globe peering in at its winter white charm. But every now and then our imperfect, stolen moments of family and holiday collide and make something uniquely our own, our Jewish December.

Jacy Sutton’s debut novel, Available to Chat, published by Booktrope, hits bookstores in  February. Until then, Jacy continues her work as a non-profit PR writer, mom, wife and chief dog walker. Find her at Jacy Sutton  and on Facebook and Twitter.