Once upon a time, I had a playgroup with 20 children at my house. True story. It was the best of times, but in reality, it was the worst of times. I learned a valuable lesson: 20 children in one space should only happen when there is serious structure to the event and with people that have advanced degrees or more patience than I do. Like school. Or church. Or anywhere that isn’t my house.

But, that experience taught me that we all handle stress in our own way. My way was to get tense and force myself to smile at the kid who was eating fruit snacks on my bed when the rest of us were playing outside.

The truth of the matter though was that I also learned that playgroups are a survival of the fittest-type experience.

I would argue that play groups are something equivalent to The Hunger Games (because pre-schoolers are always hungry) meets Survivor (because you never know who will come out of it alive) meets The Blair Witch Project (because sometimes they are just straight up terrifying when you have that many snotty noses in one place) meets Fight Club (because….toddlers). 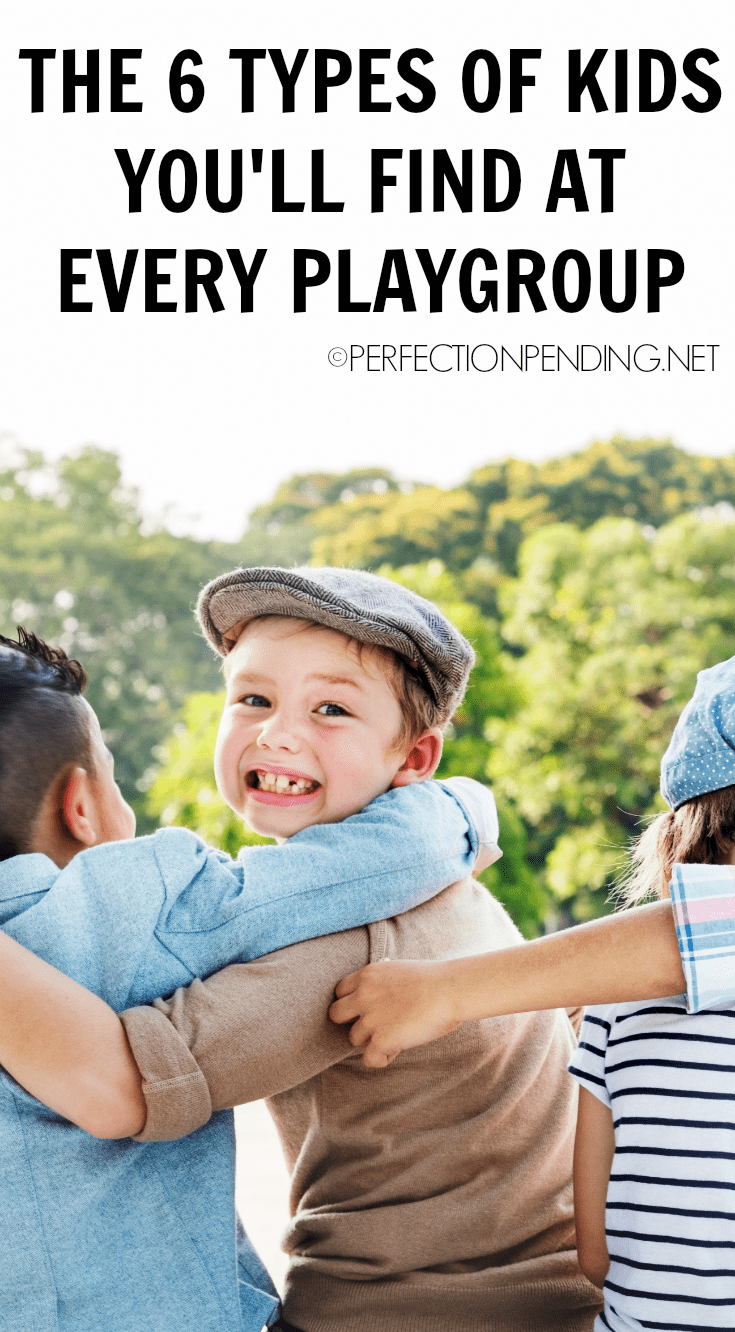 And like most experiences like this you can learn a lot about the participants forced together against their will. So, while I can’t in good conscious actually suggest someone host a playdate with 20 children, I do suggest that you keep your eyes open to what you can learn about others at your next playgroup. Specifically, the kids. Here are some perpetrators to look out for at your next event.

The Wanderer. This is the child that will inevitably end up where he is not supposed to be. It might be your master bedroom, or it could be the tiny space between your house and the garage. Or, even worse, this kid might end up going through your lingerie drawer and come out wearing your “fancy pants” on his head.

The Quiet Destructor. This type of child is hell bent on destroying something while at your house. But it’s hard to get mad because they do it so quietly, so you can’t imagine it was actually on purpose. But, I’m here to tell you….it was. This is the child that will take all the brand new crayons and sit in a corner methodically breaking every. single. one. And, then take a permanent marker to your new bedspread.

The Hangry Child. The problem with this child is that their behavior usually spreads like the plague over the entire group. This is the child of the mom that forgot to pack the snacks, but she sees another kid in a corner with goldfish. This little sweetie will maim, hit, and pummel another child just to get a tiny gold morsel in her mouth. And, in a matter of moments, all of your sweet preschoolers decide it’s time for lunch at 9:35 am.

The Emotional Wreck. (who really just needs a nap). This child is by far the most obnoxious, but not necessarily the most dangerous. He will sit by his mom whining while she tries to tell the group a riveting tale about her cousin’s sister’s kid who overheard at her playgroup that if you sing to your kid 5 minutes a day, it raises their IQ by 10%. The emotional wreck by her side just wants to go home for his nap so his mom will just. stop. singing.

The Risk Takers. These are the kids making weapons in your backyard out of twigs and jagged rocks and deciding that it’s a good idea to have a “battle”. They also try to fit 15 kids onto the hammock and have a swinging contest. These kids will most likely end up bloodied by the end, and you’ll worry that you’re going to get sued for having them over.

The Aggressor. This is the kid pouring bubbles down the back of another child, or running up and slapping his friend for no apparent reason. But, you can’t really blame him. It’s snack time and mom forgot his sippy cup. He doesn’t think anyone is watching (because in reality, they aren’t) so for lack of an insufficient vocabulary, this kid gets his point across to his mom by forcing her to remove him from the group after he has drawn blood from his BFF. His mom is usually embarrassed, but he’s smiling as she says “Behave or we’re going to leave” in her angry quiet whisper voice.  But, what she doesn’t know is that his goal all along was to make as quick of an exit as possible.

Because he knows, like all preschoolers, that play groups aren’t about the kids anyway. And, the poor kid is just ready for a snack.

« 4 Reasons Why Mommy Pacts are Better Than Mommy Wars (And a Giveaway!)
20 Murphy’s Laws For Moms »