You get what you get and you don’t throw a fit.

It has a nice ring to it don’t you think? Never have I been more grateful to a preschool teacher than when my 5 year old was in his first year of preschool and told me that was what the teacher said when all the kids were complaining at snack time. I cannot imagine what that preschool teacher went through dealing with 23 complaining kids when I only have to deal with my 3. Poor woman.

You see, we have a problem in our house that is an epidemic, really. Every child simultaneously decided that the color blue was the most coveted color. For everything. And, don’t be surprised to hear that my daughter is the one that started it. Not my boys.

It was as if one day, suddenly, blue was the best. And, I kid you not….it’s made my life hell some days. I never thought it was possible to wish that a color would die. Disappear. I mean, you wish that of your enemies, but a color? That’s a little ridiculous.

But, I knew it was a problem that was getting out of control when my husband went to the store and bought a stack full of blue cups and set it down on the counter triumphantly. “Now, no one has to complain that they didn’t get the blue one”. If he was fed up, then you know it was bad. 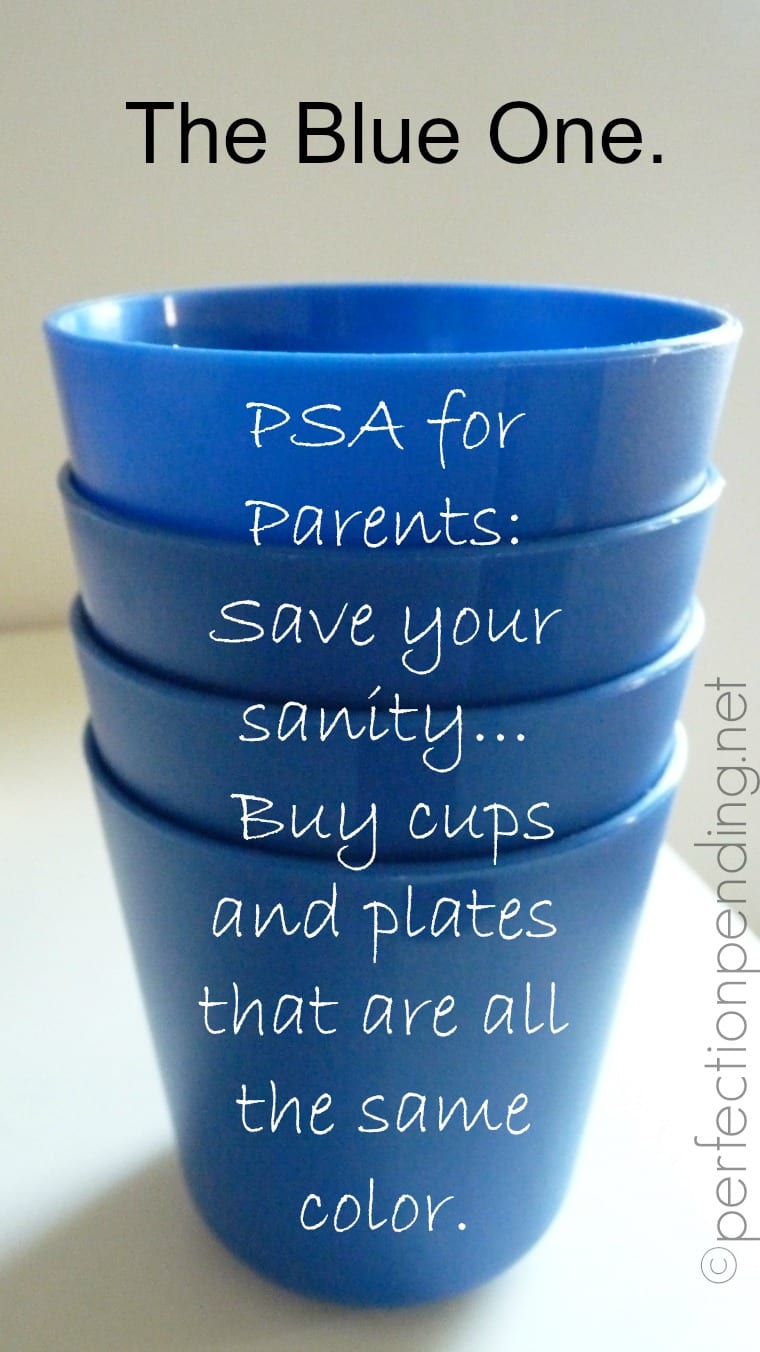 In fact, I think the first two word sentence my youngest put together was, “Blue one” He had to fight to survive the battle of the blue cup.

Like most houses, we have a plethora of plastic kids cups, plates, and bowls. I like the IKEA kind because they are small, and easy to use. But, the problem is that they come in too many different colors. And, no one in this house wants anything but blue. “I want the blue one!” they scream out at breakfast. lunch. and dinner. Even our dinner plates have 3 different colored trims. What do they all want? The blue one, of course.

I try reasoning. But, reasoning with a 2 year old is like trying to get all the sand out of the crevices of your car after a trip to the beach. It’s impossible. “It doesn’t taste any different in the orange bowl.” I try as the tears are flowing. Because heaven forbid we eat out of a green bowl instead of a blue one.

“But, he had the blue one last time!” they argue through tears. How can they remember this, but they can’t remember something I asked them to do 5 minutes ago?

I try, “You get what you get and you don’t throw a fit”. They finally eat their oatmeal sadly out of the orange bowl through sniffles and blue colored sadness.

5 year old sits at the counter. Two year old is still climbing into his seat when 5 year old watches me pull two different colored bowls from the cabinet. He’s quiet. Just watching. He turns to his brother, “Chandler, you get what you get and you don’t throw a fit.” He’s trying reverse psychology on me already. I call his bluff and hand the blue bowl to his little brother.

“I NEVER get the blue bowl.”

“You had it yesterday buddy. Remember? And, what about the saying, ‘You get what you get and you don’t throw a fit?'”

“But, he had the blue one last time!” (still crying)

Two year old gets angry. “Blue one!” he yells trying to make sure the precious blue bowl is not ripped from his tiny fingers.

Maybe you think this phase will pass. I thought so too. But, here we are almost two years later and blue is still the best. It must make food taste better. Drinks must be more refreshing in blue cups. Because frankly, I can’t wrap my head around the fact that these fights go on every single day.

And, as I was browsing pinterest a few minutes ago, I saw a picture of a bunch of multi-colored balloons. My 2 year old saw it too and said, “Mommy, blue one.”

When I’m checking into the mental ward and they ask, “What brings you here?” I think I will just mutter, “The blue one.”

« You Have It In you.
Easy One Dish Pork Chops and Wild Rice Recipe »