One thing I love about the blogging world is the people we “meet”. I hope to meet this next blogger in real life one day. Because she lives pretty dang close to me. She’s super talented, has aspirations for good things, and is a downright nice person. At least that’s how I picture her in my mind. She’s sharing with us her thoughts on labels, and whether or not we should be using them with our kids. Her perspective is interesting and made me think. And that’s always a good thing.  If you want to be part of my Be Brave Guest Series, go here.

So I hear there’s a movement to #BanBossy. I believe (and please correct me if I’m wrong) that those interested in this movement take issue with the idea that girls are called bossy for exhibiting traits that are accepted and even encouraged in men, like assertiveness. Makes sense to me. Although I must admit I have met my fair share of little girls (and boys, for that matter) whose behavior came across to me as just plain bossy and obnoxious, beyond the point of just asserting an opinion, but I guess that’s not really the point. Go feminism. Woo!

Anyway, that’s not really what this post is about. Meredith here at Perfection Pending inspired me to write something about bravery, and as I collected my thoughts about what to say, I realized that “brave” can be a bit of a dangerous word.

I gave birth to two of my three boys without any medication, at home; one of those unassisted by a midwife. When people learn this about me, the response is almost always the same. “Wow. I could never do that. You’re so brave.” But I don’t feel brave.

People tell me I’m brave for performing onstage, but again, I don’t feel it. I don’t get nervous about that because it’s dark and I can forget that there are people watching. But ask me to sing for my husband in the car? Totally freaks me out. On the rare occasion that it happens I actually make him look away so I can’t see his face.

When people say I’m brave it makes me feel like I HAVE to be brave. And the thing is, I don’t always want to be brave. We’re all brave about some things and we’re all afraid of some things. To me, bravery is not a trait, it’s a choice we are constantly making. It’s not about who we are, it’s about what we want.

I wanted a natural birth enough (or should I say I was stubborn and proud enough) to muscle through the sheer terror I felt. Did I feel brave then? Not one bit! Had I been in the hospital you’d better believe I would have given my right leg for some drugs! Most people we perceive to be “brave” are just people who want what they want badly enough to ignore how scared they feel.

So why do I think we should #BanBrave? Well, if we’re in the mood to ban words, I think we should also get rid of the words that label us, that make us feel like, if we don’t “have” them at any given moment, we’re somehow less awesome. But it’s unrealistic to expect that of anyone.

We’re all a little brave. We’re all smart about some things and clueless about others. We’re all funny sometimes. We’re all beautiful and radiant sometimes… and sometimes not so much. And that’s fantastic.

The whole idea of “labeling” is something I came across in a parenting book at some point and it’s a tough concept to wrap your head around. I’m still trying to figure it out. But the idea behind it (I think) is that we need to be careful not to tell others (and kids in particular) that they ARE this or that, because then they either feel dishonest/misunderstood because they don’t perceive themselves to be that way, or because they feel like that trait is why you love them and if they’re not always exhibiting that trait they are somehow less worthy of love.

For example: growing up, I was the “talented” one. I was praised for my writing and my singing while my sister was praised for being good and kind. Now that we’re adults, my sister constantly feels like she has to be “nice” and I always feel like I have to be achieving things, or we’re somehow less worthy of love. Of course this is not the case, but those adjectives are such a vital part of our identity that it’s very hard to let them go.

Is it possible to avoid creating this pressure in our kids? Not sure. I’m doing my best. When they do something right, my husband and I try to resist the urge to say “you’re so smart” and instead say “that was a smart thing to do.” The subtle difference is that you’re praising the result, not the person. Will it make any difference? Who knows. But I guess it’s worth a try.

Ultimately, what I wanted to tell you is that you ARE brave, just like we all are. You’re brave when you have to be, and that’s enough. I know you feel scared a lot, too. Maybe even all the time. Me too, man. But that’s okay. You’ll manage to do what needs to be done. You have it in you, you just have to decide you want it enough to muscle through. And if you can’t, maybe it wasn’t that big of a deal in the first place. So don’t worry about it and have a cookie instead. 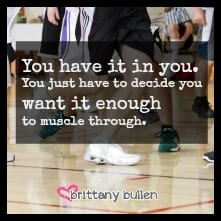 Until next time,
Brittany

Um, did I just propose that we ban adjectives? Maybe I should think this through a little… =)

Do you have any more words you’d like to ban? Let me know in the comments! 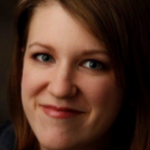 Brittany Bullen is a mom to three boys, a performer, a thrifter and an aspiring vegan. She writes for brittanybullen.com and crowdserve.org.  You can also find her on Facebook,Google+,YouTube,Pinterest,Instagram,Bloglovin orTwitter.