I was trying to explain to one of my friends the other day about how annoying this stage of parenting is.

I love my kids. They are precious angel faces that I live and breathe for.

But, it’s summer. And, they’re all up in my business all the time. And, I work from home, so it’s been…well – an adjustment, let’s say.

Like, if I can JUST get to where they all can feed themselves, or wipe their own butts, or play independently it will be easier.

And, in some ways this stage is SOO much easier. Because they all shower on their own, and they CAN fix little meals for themselves, and they are starting to get my jokes which is actually pretty cool.

But, for some reason – this middle stage before puberty but after toddlerhood is both the sweet spot and the annoying one. But, it’s not just that it’s annoying, it’s still hard. Because parenting doesn’t really get easier.

They argue a lot now, because they’re smarter, and have gotten better with words. Funny how we wanted them to talk SO bad!

They still whine, but it’s the kind of whining that you’re like – C’mon now – you’re too big to be acting like that. And, then they roll their eyes and slam doors and tell you that “you’re the worst mom ever”

They aren’t as cuddly anymore. And, while they are still good looking children, they don’t have that sweet baby cuteness anymore. They are losing teeth in rapid succession and the tooth fairy can’t keep up. And, it’s shocking when they DUDE and BRUH and you see the little-ness slipping away.

They want to stay up later, and do big kid things which some days is super fun to have that extra time with them, and some days, you’re just done with all of it, so frankly, it’s super annoying.

They want to be big so bad, but dang it if they don’t still need a lot of sleep to function the next day.

And, they somehow have gotten louder with their voices, electronics, music, and just their existence. I CRAVE the quiet again.

I can sometimes see glimpses of the teenagers and young adults they will be and it breaks me into a million pieces one second, but also make me want to get there like yesterday so we’re over the hump of pre-pubescent emotions.

My point is this – I wouldn’t want to go back when I had a horribly colicky baby, a toddler, and a preschooler for anything in the world. Even though some things about it were simpler. But, every stage of parenting is hard, beautiful, and annoying.

I’m happy to be past diapers, and toddler messes, and all the little kid stuff.

But, I’m sad too. I’m in this weird crux of parenting where I miss their littleness, but also really love their growing independence.

I hate their attitudes but am impressed with their wit and smarts when they argue.

I miss the cuddles I used to get so freely, and yet am happy that I don’t need to hold them all the freaking time anymore.

I’m happy those years are gone, and I miss them terribly some days because there aren’t cute mispronunciations, and dimples in elbows, hands, and feet.

But, would I go back? No way. Even though this stage is somehow louder and more annoying. I also know that this stage right here is kind of the best, too.

So, today, when they were all somehow getting along and coloring together (something I’m shocked I didn’t have to bribe or pay them to do) on our washable tablecloth, I snapped this photo. 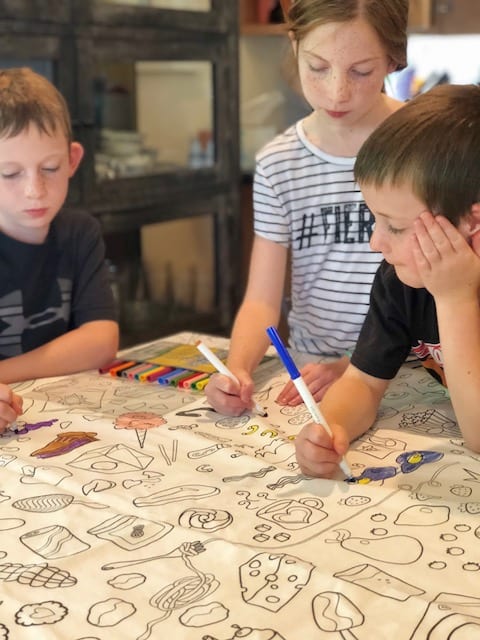 And, then I saw it – the little dimples in my youngest’s hands. They were still there. My baby wasn’t totally gone yet.

I breathed out a sigh of relief when I saw it.

It’s annoying some days when they all are saying they’re bored, or have to be reminded 85 times to hang up a single wet towel. It’s definitely not easier.

The beauty though is that when they’re teenagers, I’ll look back at this photo and oooh and aaah over how sweet, and little they were.

Even though right now they can get on my last nerve.

But, no matter the attitudes, or how many permanent teeth they somehow have, or the eye-rolls, and attitudes – they will always be my babies.