My cousin teased me a bit when I went to FB asking my friends for tips on surviving my 5 year old’s upcoming tonsillectomy. I asked, “Any advice from anyone that’s gone through this?” She teased me because I was asking FB even though I’m married to a health professional. I told her that I wasn’t seeking medical advice on FB, I was seeking MOM advice.

Sometimes Mom advice is just as good, if not BETTER than what the doctor tells you, don’t you think? Which, incidentally had been not very helpful for practical use. Sure, he told me the recovery was 10 days (we were getting tonsils, adenoids, and tubes in the ears) and that pain medications were so good now that it was easily manageable through numbing lollipops, hydrocodone, and ibuprofen cocktails, but I wanted to know what it was REALLY going to be like. 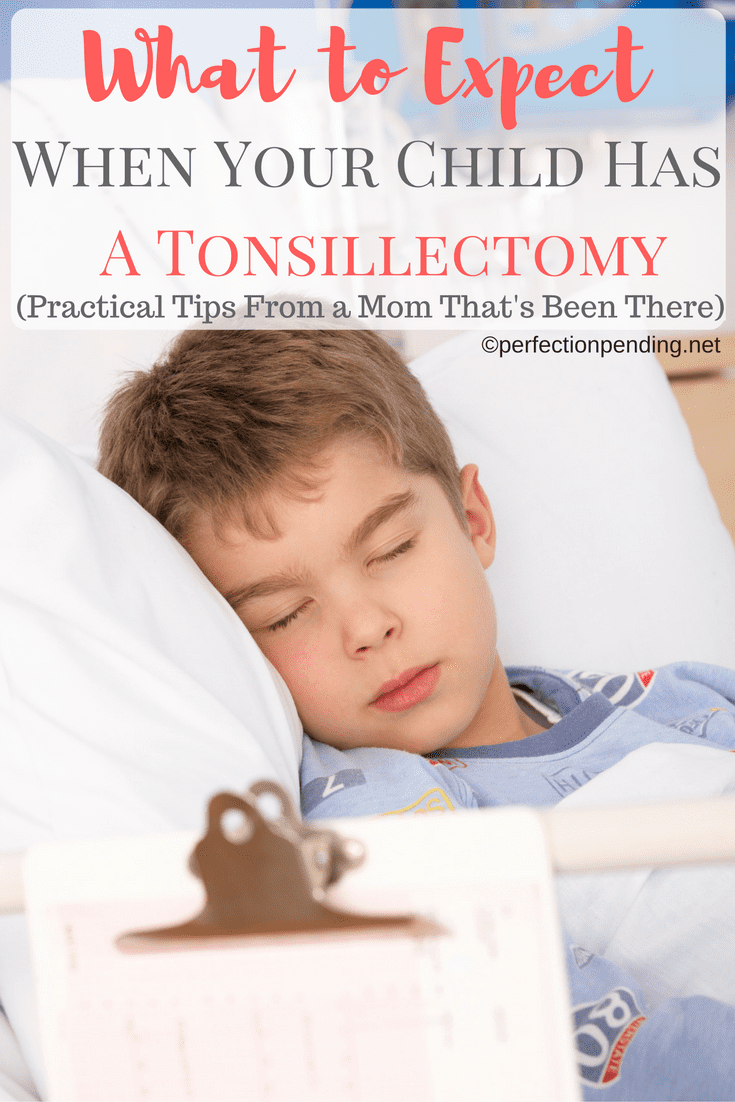 Practical Mom Tips When Your Child Has a Tonsillectomy

Okay, so this surgery was years ago, but it still feels like it was yesterday. And while it has been a while, because I originally blogged about this on day 7 postop, it’s like a time warp. I’ve updated the post for clarity and ease, but I did leave as much of the original as possible because having another mom who’s been there to guide you through a scary experience is amazing and relieving.

Today, we are on day 7, and I have to say that we’re surviving, we might be going a little bit stir crazy, and I know it will all be over soon. But, when you’re anticipating your 5-year-old getting cut open (even if it IS a surgery they could do with their eyes closed) it is still scary. At least it was for this mama.

Here are 13 things I learned, and little tips that helped us.

1. You will cry no matter how strong you are.

My youngest had surgery when he was 8 months old and I didn’t cry. But, this time around, there was something about seeing my big (yet tiny) 5 year old walk back through the surgery doors with an anesthesiologist, clutching his favorite stuffed animal, with his head down that almost ripped my heart in two. That image will be etched in my brain forever. I turned around to head to the waiting area and burst into tears. Some random guy in the hallway gave me sympathetic encouragement while my husband tried to console me.

2. Take their favorite toy to the hospital.

When my little guy was scared as we were preparing to have him go back, it gave him comfort to know that his favorite stuffed animal (Snoopy) would be right by his side. I told him I was jealous that Snoopy got to go into the surgery room with him. That made him smile. Here he is right after he got out clutching it. Breaks my heart. 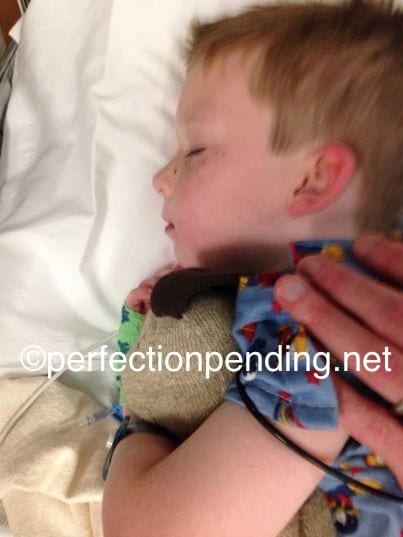 3. Ask if they have a nurse or staff member to talk to them about the surgery beforehand.

We had my son’s surgery at a very reputable children’s hospital. We told the doctors that we were worried he might freak out once he was back there without us. They had a nurse come out with a book they had made of photos of the surgery room. It helped my son a lot to see pictures of the table he would lay on while he was in there, and they even brought a mask out beforehand to let him hold it and see. Doing this while he was with his parents was very comforting to him. You could also try a children’s book on getting your tonsils removed like this one.

4. You will buy popsicles, jello, pudding, ice cream, smoothie juices and plenty of yogurt and he might just want something random you didn’t think of.

My kid loves all of those things I listed that well-meaning people suggested I buy. But, the thing that sounded best to him? Sprite. Something I hadn’t bought, of course. But, it was easy enough to run to the store and get him some.

5. Your other kids will want to eat ice cream for dinner too.

Luckily, I bought plenty to share, because there was no telling the other two that the popsicles were just for Kyle and not for them. Make sure you factor that in when you are stocking up on soft, cold foods. And, it’s OK to let them all have 3 desserts after dinner.

I also tried to stock up on soft foods he liked, but again, the only thing that sounded good was Ramen. Luckily, we stock up on that anyway. Ramen noodles are currently his main source of food. And, I’m OK with that. At least he’s eating.

I had the lollipops, hydrocodone and ibuprofen, and I was prepared to use them all. But, after the first day, we actually stopped the hydrocodone. It was upsetting his tummy and he was trying to throw up. After 24 hours, we tried again and did only half the recommended dosage and he did much better. In the meantime, Ibuprofen did the trick. I’ve been good at keeping the Ibuprofen in him at all times, but using the heavy duty stuff as needed. Which isn’t as often as you’d think.

I expected something totally different than what I got when it came to my son’s pain. He didn’t tell me he was in a lot of pain. But, I figured out that he was really quiet and mopey when he wasn’t feeling good. I was expecting tears or crying. Honestly, that didn’t really happen. Instead, he just moped, looked sad, and got really really quiet. Be in tune with what your kid might be telling you.

My husband had his tonsils out when he was a teenager. His Mom actually had a great idea since he didn’t want to talk. She got him a bell like this one. All these years later, and he still has that bell. So, guess who got to use it? My little man. We give it to him to keep by his bed at night so that he doesn’t have to yell for us from the other room. Use a baby monitor if you are worried about not hearing it. If your child is really struggling with speaking (mine did OK) you could let him carry it around all day if it isn’t going to drive you crazy.

10. Try not to freak out when your kid says something weird.

One night, our little man started saying that his tongue “felt weird” “felt shorter than normal” and “the purple medicine made his tongue hurt”. All of those things made me freak out and think he was having an allergic reaction. He wasn’t. That was a moment that I was glad my husband has a medical background. He checked him out and declared that we could go back to bed. But, not before I made our little guy sleep on the floor in our room for the night just in case. I have problems, I know. Be prepared to play musical beds. I slept in my 5 year old’s room that night.

11. Be OK with calling the doctor.

There was one night when my son’s fever got up to 101. I worried because our discharge instructions were scary, and they warned us that a 101 or higher fever could be a sign of infection. I wanted to call but my husband didn’t. Ultimately, I did. I felt so much better after. My doctor took it very seriously, and also made me feel better so that I wasn’t up all night worrying.

12. Stock up on different books and movies from the library.

Your child will get bored.  Especially on the days when he is feeling good. Guess what? So will YOU! We were instructed to have no outdoor activities for 10 days! That’s a LONG time. There will be lots of downtime, snuggles, and taking it easy for everyone. Be prepared with something different to keep your child happy. Our Kindle was super inexpensive and perfect for those long days.

13. It’s an up and down roller coaster ride.

Every single day is unique. The first day, we breezed right through. He came home, felt happy, played video games, and ate solids within hours of surgery. 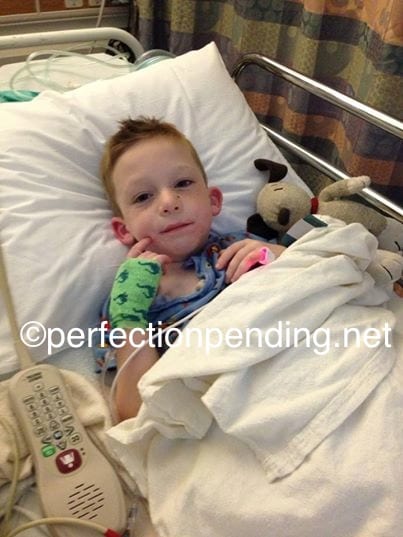 Day 2? Not so much. He was trying to throw up first thing in the morning, refusing meds, and super grouchy. Yesterday (day 6) was great. He got up and got dressed, wanted to run errands (I made him stay in the shopping cart) and ate a ton. Today he woke up miserable again. We’re on day 7. Don’t push your child to do more than they should because they have a good day. The next one could be a total wash. I’m hoping tomorrow will be easier.

I’m just glad we did it and we are doing much better than expected. My husband and I were super worried about how our son would react, but he’s really been doing awesome. Yes, there have been ups and downs, but for the most part, kids are resilient and will do great to a routine surgery like this one. And, I hope that the ear infections, ruptured ear drums and snoring will be behind us from now on.

Did you like this post? Make sure to pin it in case you or a friend ever needs some real life, mom advice!

This post is, of course, in no way real medical advice. This is Mom advice. Any questions or concerns need to be answered by a real doctor. I’m just a mom who’s been through it.

If you liked this post, get my book, Mom Life: Perfection Pending. It’s a humorous look at parenting today and includes this kind of practical and practically awesome advice.