0 shares
Sometimes I look back at my time as a new mother and think it traumatized me. New motherhood wrecked me in fact. I know that sounds dramatic, and frankly, it is.
However, when I was in it, I felt so overwhelmed and insecure that I do think there was a touch of trauma involved.
It was most likely my own trauma from childhood bubbling up in a way I’ve still yet to fully understand as a mom even 15 years in, but I do think that being a mom was really hard for me in the beginning for a lot of reasons.
Postpartum depression hit me every time I had another baby as well as postpartum anxiety. I felt like I was an emotional mess barely keeping her head above water. And, some days I for sure was. There were days in the thick of new motherhood where I questioned my abilities, but also questioned my life choices.

And my biggest fear of all? I wasn’t enjoying new motherhood enough.

It’s always annoyed me that I felt this immense pressure to soak it all in and “enjoy ever second.” I hated that phrase. Still do. I know it’s well intentioned, and I totally understand the sentiment better now that the empty nest years are closer to my reality than the memories of the little kid years.

But, I was always afraid as a new mom.

Lord have mercy I was afraid of all of it.

And because I seemed to focus on that perpetual state of fear back then, I was also afraid I was missing the good stuff. I was afraid I wasn’t enjoying them enough or soaking it in, or being present like I “should.”
But, today, 15 1/2 years in to being a mom, an old home video popped up in my Facebook memories. I was mesmerized as I always am now at what was happening in our little world when my kids were babies.
My youngest couldn’t walk yet, and was in his footed, zip up jammies, and my middle was next to me on the couch giggling as he tried out my back scratcher in his pajamas.
They looked fresh out of the bath, and the baby was kind of whining. It was background noise to me at the time. He was my third, and my focus was always split between three kids six and under. I watched the video with my middle who is about to become a teenager next month. We laughed at the way he said certain words, and the whole video was full of smiles and giggles. 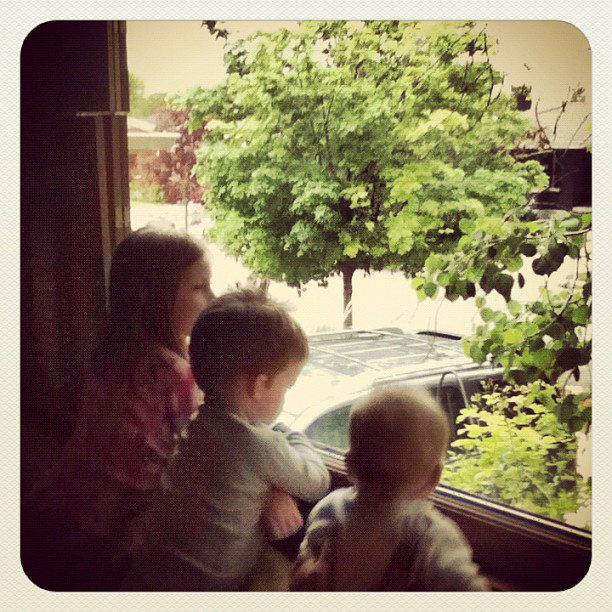 I wasn’t in the frame of the video but I can picture her.

Tired. Hair probably in a messy bun at the end of a long day. A part of me was probably waiting for the clock to hit that magical time where I could put the kids in bed and have some rare alone time with my husband, or pass out in front of a TV show.
The furniture in the video is long gone now. The old box TV we used to have and the mismatched thrifted couch and chair. None of that is important, but it’s weird to take a step back into another time with a fresh perspective. We were younger. Poorer. And definitely inexperienced.
I could hear my voice in the video. Calm and patient. Laughing. Pointing out things to my middle child. Engaging with the baby. Tickling their bellies.
My son, almost a teenager laughed and smiled as we watched the video together and a thought came over me about my new motherhood experience that whispered to my heart, “See? You DID enjoy it.”

And, mamas I did enjoy it.

I watched that video with the eyes of a veteran mother that still struggles, but no longer feels totally incapable, inadequate, and riddled with guilt.
I watched it with the eyes of someone new. I’m not the same woman I was 10 or so years ago. Far from it in fact.
Motherhood wrecked me in the beginning. Maybe it even traumatized me a little to have the weight of these lives in my hands. It was a lot of responsibility and pressure. It still is.
But, I enjoyed it, y’all. I saw it in that video. I had a lot of moments like that too. Watching my kids. Video taping them. Taking pictures. Soaking it up. And those memories float back into my life now via old Facebook videos and photos and guess what? I get to enjoy it again.

The point is, if you’re feeling inadequate and scared and overwhelmed at the weight of motherhood, and you’re feeling the pressure of not enjoying it enough – just know that you are.
It may not feel like it when you’re in the middle of it, but I promise you you’re doing it.
You’re taking the pictures and breathing in heads after a bath, and you’re watching them closely and seeing them as they toddle around. You’re amazed at the things they learn despite your inadequacies, and you’re feeling those chubby toddler arms around your neck.
You tickle bellies and teach them about the world, and you read one more story when you can.
I promise you in the moment you may not feel good enough or strong enough or even sane enough. But, you are doing it. Every day. Even when your bones are tired and your soul is sucked dry. You’re doing it.
And I promise you – you’re enjoying it, too. Just the right amount.

« My Secret Weapon When I’m Feeling Lost Is To Make A List
I Never Get A Break From My Child, So How Can I Keep Going? »