When my oldest was born, I remember being so overwhelmed by motherhood. But as she grew, I was relieved that she seemingly inherited my husband’s temperament. Looking back, I realize now that she was an easy going baby. She adapted easily to moves across state lines more than once, and traveled well. She even used to sit with her toys and whisper as a 9 month old. I’m not even kidding.

I thought this parenting thing wasn’t so bad and as long as my kids all inherited my husband’s easy going nature, I might just figure out how to be a good mom. I was certainly relieved that she didn’t inherit my highly emotional mood swings, and constant worry.

He was a colicky baby due to some severe food allergy issues that he suffered from as an infant. I cried all the time from frustration just trying to adapt to this tiny screaming bundle who seemed upset all the time. But, we all survived it, and I’m happy to say that he’s a thriving six year old now. He’s also still a very emotional child.

Recently, his teacher told me that he was the most well-behaved kid in his class. I immediately bragged in a group text to my siblings. He’s well behaved at home, but crying can happen at the drop of the hat. Emotions are out there. I was surprised that school hadn’t brought more conflict. He had complained to me the first couple of weeks that he missed me, and was obviously adjusting to being gone all day, but for the most part, 1st grade was smooth sailing.

Why that struck me as so profound, I’m not sure. Except that I often as a parent think everything is a phase…if I can just do something different or just right, things might change. But, you can’t change who a kid is innately.

Last week, my boy came home upset when another kid called him a cry baby. I couldn’t help but think, this will not be the first time he’s called a cry baby. As a child, I cried at every little emotion I felt. I still do when I’m in the comfort of my own home. If I’m angry I cry, hurt, frustrated, you name it, I could be called a cry baby too.

I’m emotionally honest. I just can’t help it. And, I used to think that’s the last thing I would want my kids to inherit. Especially one of my boys. After all, who wants to hang out with a cry baby or a whiner?

But, the older I get, I’ve learned to embrace my emotional honesty. After all, it’s not something that I have too much control over. I manage to hold back the tears when I’m out in public, but the feelings are still there, bubbling under the surface. I feel deeply, and that’s OK.

And, it’s OK for my son to feel deeply too.

In a world where male emotions are often hidden, and even ridiculed, part of me wants to help my son not become that kid that gets picked on. He could use a little toughening up, but I hate myself for even thinking that. Because, no, he doesn’t really need to be toughened up. He needs to be himself. And, love himself for it. He’s going to be whoever he’s going to be.

I suspect that he’ll feel a struggle with constantly trying to overcome being emotional. He’ll want to control his feelings in a way that is acceptable for society, but I hope he doesn’t change who he is. Because, more than anything, I want him to know that being emotional isn’t always a bad thing.

I know he will be a great friend because of it, and loyal to those that are loyal to him. I know one day he won’t be afraid to say I love you when he finds that special girl, and I know he’ll love her fiercely. And, he’ll be a very empathetic father and understanding when his daughter might hit puberty. In fact, I’m finding lots of hidden blessings in my highly emotional boy. 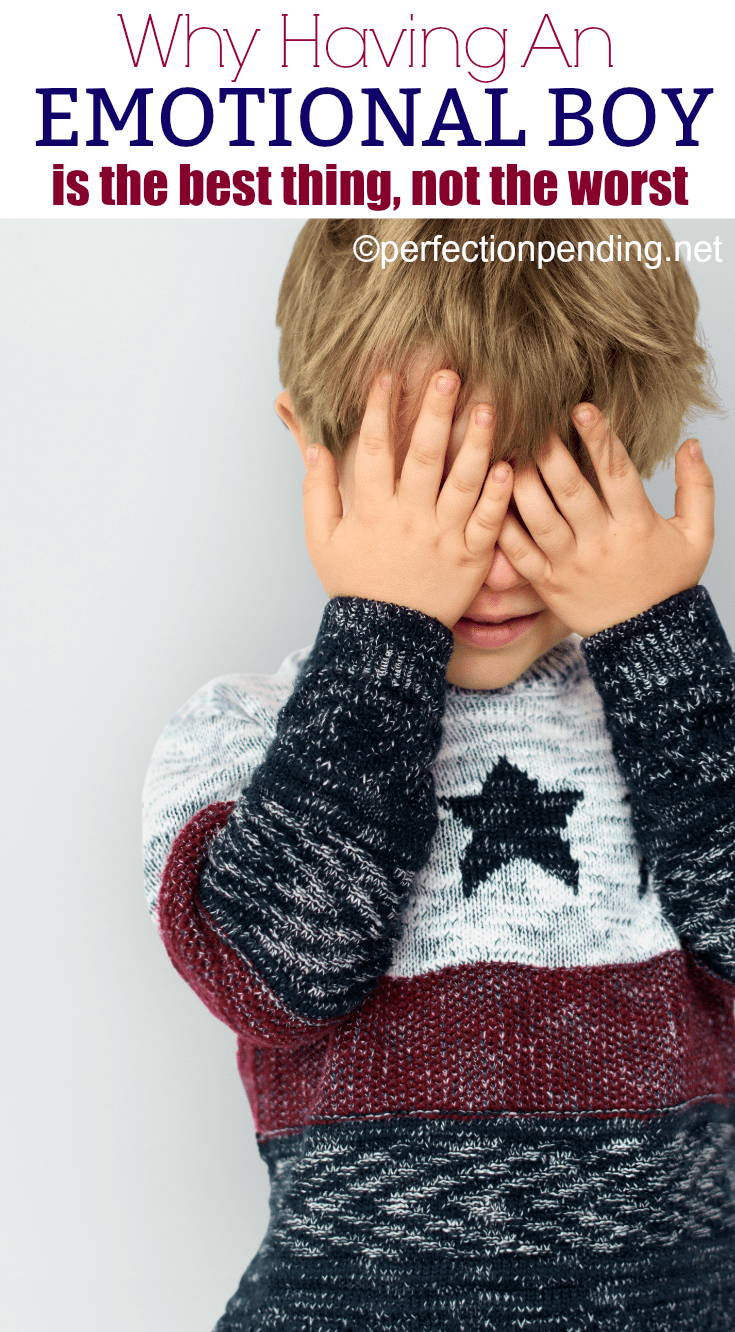 For one, he snuggles me more. Sometimes, this seems exhausting as I’m tired at the end of the day and just want my kids in bed. But, when he tells me he wants to snuggle, I know it’s how he reconnects with me after a long day. And, I’ve found that when I need comfort, he is the kid that I can go to for extra hugs and snuggles. As a mom, sometimes all you need is a hug.

I never wonder how he feels about me. I love how he puts it all out there. He tells me he loves me out of the blue, he wants to spend time with me and vocalizes it. I know when he’s upset with me too. So, having a kid that’s easy to figure out is a blessing to me as a mom. There is no guesswork.

Because he’s highly emotional, he lights up a room when he’s happy. And, when he’s happy, the whole room can feed off his energy. He tells jokes, because he loves making others laugh, and he feels the happy as much as he feels everything else. And, it’s a blessing to have a kid like that in your family.

There are difficulties in raising a highly emotional child. Road blocks that we encounter all the time that make me wonder how I’m going to get through each stage that he encounters. He has a hard time apologizing when he’s hurt someone’s feelings, because he feels so bad that he did it, that he’s more worried about his own feelings than someone else’s. And, I’m sure there will be more challenges ahead as we encounter bullying (geez, I hope we don’t) or adolescence (do they have to go through that?)

I’m trying to tell myself that we will handle it instead of worrying about the unknown.

I’m sure there will be lots of talks in my future about how it’s OK to feel what he’s feeling. I don’t want him to bottle that up. But, deep down, I know it will all be OK. I’m still learning as a 38 year old mom to three how to own my emotions and accept them, and even love who they have turned me into. It’s OK to feel deeply, and be honest about your feelings. Even as a boy. And, I’m glad that I have a kid who is a reflection of me in that way.

The truth is, I love having a boy that feels so deeply, and loves so much. Because right now, I’m the one he loves.